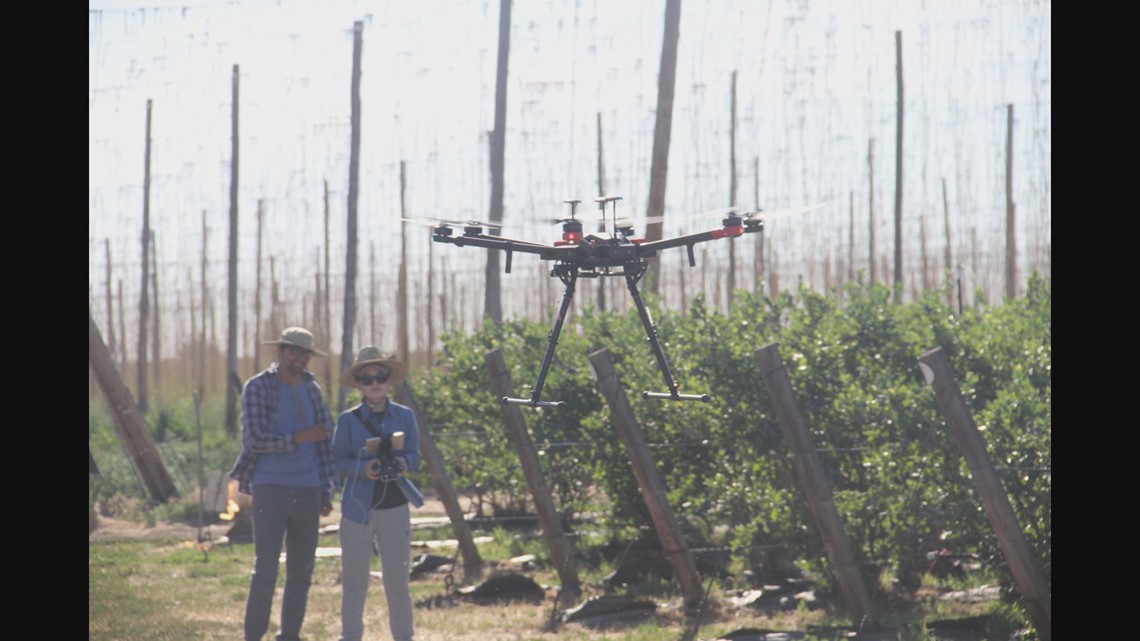 Birds are a major nuisance for wine growers, and now Washington State University is working on a program to use drones to scare them away.

PROSSER, Wash. — Drones are finding their way into more and more industries and use cases, and one of the latest ideas to emerge is crop protection. Washington State University (WSU) has a team working on a way to use drones to protect vineyards from birds.

Washington State has a multitude of beautiful vineyards, producing grapes for a large and growing local wine industry. But a growing crop also makes it increasingly difficult to ensure crops arrive intact.

Birds are a big obstacle, especially flocks of starlings or blackbirds that tend to fly in for dinner just when the grapes are about to be picked. Birds will take whole grapes, and they will also pick the bunches, allowing insects to do more damage.

“As harvest is approaching or when the ripeness of the berries is high, they are more attracted to the fruit,” said WSU graduate student Santosh Bhusal, who helped develop the agricultural drone system at the WSU. university.

The idea is that by scaring birds with drones, growers can avoid the kind of damage they normally expect to see each season.

Some grape growers currently use netting to try to protect their crops, but setting up and maintaining them is expensive and labor intensive. Others have turned to falconry to ward off small birds.

But now, after four years of development, WSU’s agricultural drone system is attracting attention. The research team said it’s not perfect yet, but the technology has come a long way.

“What we’ve seen is that when we’re flying drones, fewer birds come in and out of the vineyards compared to when we weren’t using the drone,” Bhusal said.

In the first manual drone flights in vineyards, researchers found about a 50% reduction in damaged fruit.

Further research helped the team develop an automated system using artificial intelligence that can detect birds in the area and launch and fly drones in response without a single human nearby.

Deterrent features can include glowing propellers and birds of prey audio from the drone.

Commercial use for grapes or other crops is likely several years away, but the team said early results show the concept has promise.

“Everyone seems excited, so that’s something we need to explore more,” Bhusal said.