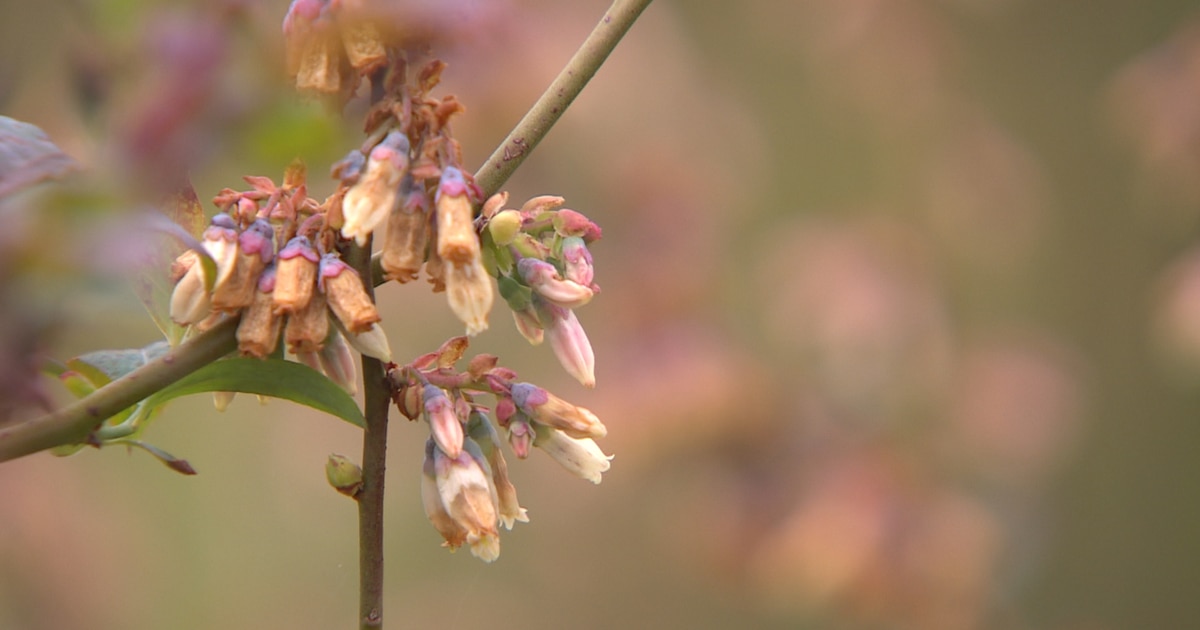 At this time of year, blueberry orchards should look like a winter wonderland. White flowers should cover the plants, ready to reveal their valuable fruits.

Instead, some Waikato orchards are brown. Those white flowers – totally dead.

“Looks like someone brought a blowtorch to this place,” Dan Peach told 1News, standing in the middle of his seven-hectare orchard near Hamilton.

Last Friday, growers in this region woke up to find that a severe frost had frozen the flowers.

“We minus 4.4 degrees Celsius,” Peach said. “We were below zero for seven hours.”

And that, he explained, is more than enough to inflict massive damage.

Peach’s orchard has about 15,000 blueberry plants — about five hectares of the seven are exposed to the elements while the other two are inside tunnels that protect them.

He estimates that up to 85% of his harvest this year is depleted and considers himself lucky to still have produce to pick from the tunnels.

Others are not so lucky.

Song Victorino Medeiros and his family bought his nearby orchard in 2019. It has just under 10,000 plants.

She remembers waking up the morning of the frost and wanting to cry.

“We thought it would be our best year since we took over.”

Just a few weeks ago, she excitedly showed videos of flower-laden trees to her family overseas.

“We were expecting a 50% increase from last year due to the amount of flowers,” she said.

Instead, on some varieties, she assumes that around 80% is lost.

For others, it’s all gone.

As she searches her orchard for what survived, she feels that the only thing that could have saved the berries were overhead sprinklers installed above the plants.

But it’s not something they can afford right now.

The tunnels that protected the crops were also very expensive – she said up to $500,000 per hectare.

Dan Peach also packs many of the blueberries produced in the region and has organized meetings for all the farmers involved – at best to show that they are not alone.

The last such devastating frost he can remember was over two decades ago.

Meanwhile, scientists warn that these types of severe weather events will only become more frequent due to climate change.

“While we have this general warming of the climate, it is the severity of these events that becomes a real problem for agriculture.

“We can breed new, more resistant varieties or have an expanded production window to spread the risk of these events,” he said.

“In the longer term, we can look at new variants that we can grow in these protected systems – even indoors.

But since we don’t know when the next devastating frost will occur, it’s a race against time.

“There is a high level of urgency – we are moving as fast as we can.”

Back in the orchards near Hamilton, growers will see over the next few weeks what can be saved.

Since other blueberry-growing regions haven’t been hit as hard, they say consumers shouldn’t worry about a shortage of berries in supermarkets.

But Song Victorino Medeiros has an easy way out as they rebuild ahead of next year’s season.

If allowing water to be used for crops is bad, try eating apples produced in Cupertino