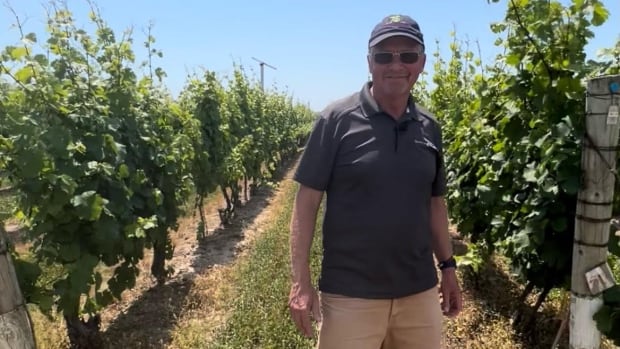 The Niagara region is experiencing some of its worst winter damage in 17 years, with early estimates measuring around 50% of vines damaged.

Grape Growers of Ontario President Matthias Oppenlaender said the impact of extreme weather events is of greater concern every year. Despite warmer weather bringing benefits to the vineyards, the unpredictability of winter has become problematic.

“We don’t know what happens from one week to the next week.”

Damage in vineyards occurs when the bud of a plant freezes to extremes in winter or spring.

“There is a main [bud] but there is a secondary and a tertiary, but when it gets too cold, then those buds freeze, they die. And obviously, the vine does not bud in the spring.”

He said, however, that even warm spells in winter and fall affect the vines.

“We could have a mild stretch in December – and that was part of the problem, we had a very wet autumn with excessive rain and a milder December and then really, very cold January.

The crop loss rate is typically 10 to 15 percent, Oppenlaender said, and the last time a major loss like this occurred was in 2005.

“We were surprised. We knew there were cold temperatures, we expected a certain amount of damage, but we didn’t expect any [this] Degree.”

“We are always trying to get this under control. It makes everything more difficult in the vineyard.”

Oppenlaender has been growing grapes for 38 years, he said, the effects of those losses can be devastating.

Our producers have deep roots in Ontario’s economy & communities. This is #localfoodweek and supporting local farmers has a big impact 🚜 This multi-generational family business @HuebelGrapes continues to invest in a sustainable future for the grape and wine industry. #localgrapes pic.twitter.com/ootViTfmk9

He said there was additional labor needed to try and salvage the vines where possible, as well as high demand for the equipment needed for this process.

“Depending on the extent of the damage, it may take us a few years to get back to a full harvest and that’s provided Mother Nature is kind to us over the next two winters.”

“Mother Nature plays a huge role in our success”

Wine Growers Ontario CEO Aaron Dobbin said the impact of climate on vines is an issue that needs to be addressed year after year.

“We take a lot of precautions, we have the wind turbines that people will see in the fields, [we] take care of the vines and prepare them for winter.”

“At the heart of our business, we are all farmers. And so Mother Nature plays a huge role in our success.”

Wine is a $4.4 billion industry in Ontario, employing over 18,000 people and attracting over 2.4 million tourists each year.

“If you want to see the impact of wineries on an area, you can just look at how many people come to Niagara and stay overnight, and how we see the restaurants, the artists, the crafts and the rooms of ‘hosts all built,'” Dobbin said.

As farmers, people in the industry are concerned about climate change, he said.

“If we have a period of very cold winters… or if we have a frost in the spring, it can have very bad effects on the harvest, on the grapes.”

He said one of the biggest challenges for farmers after losing so many crops is growing new ones.

“It’s not like wheat, [where]if you have a bad year, you turn around and replant the following year and harvest this fall.”

“There will be farmers who will plant new plantations. But it takes three to five years for these planters to really produce grapes.”

As for what kind of impact this winter damage will have on Niagara’s wine industry, Dobbin said the public won’t feel it — yet.

“We will have enough wine to continue producing high-quality Ontario wines, but we may not see as much as we have seen in the past two years.”

“It has been very specific geographically, where the impacts have been felt, so there will be a number of producers who will feel that [loss].”

“We grow 100% of our French apricots in our own orchards”