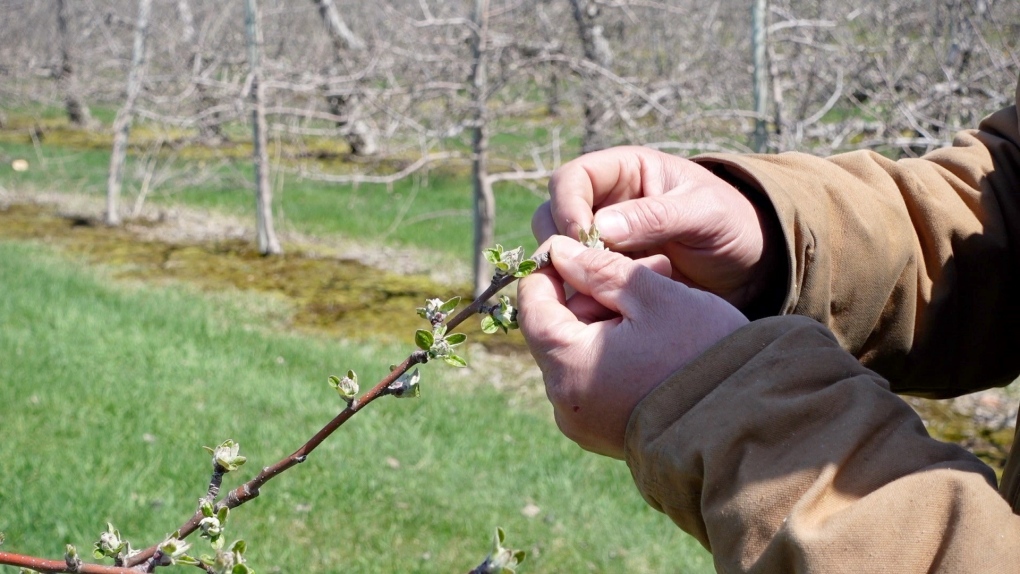 Many farms in the region saw temperatures drop to -5C overnight from Wednesday to Thursday morning. Tom Heeman, Field Manager at Heeman’s, was surveying the strawberry fields in Thorndale, Ontario. Thursday morning with mixed success.

Frost blankets were able to protect most plants, but one field didn’t hold up as well.

“The bad news is that some of those early blooms have been smothered out. We’re getting a hard frost below minus three, which is going to penetrate those covers and it’s going to dig into the crop,” Heeman says of ‘a field.

It’s not a total loss as the plants will add more flowers as the temperature warms up, saying, “One of the benefits of a delayed spring is that we don’t have that – that heat [is] pushing them into a risky scenario.

At Apple Land Station, Dan Muzykowsky says it’s too early to tell if frost will hamper picking your own apple orchard.

“Once they open up a bit more, we’ll know if they’ve burned out from the cold, but hopefully we’ll endure and have another night here at minus two they’re talking tonight,” he said. .

Muzykowsky says apples are a hearty crop, but prolonged exposure to frost can threaten the harvest.

“We’ll see what happens [after] two nights of that might be fine. But if it spreads further, we will have more damage, I’m sure,” he said.

Muzykowsky says this is the fourth spring in a row that they have had a late frost and they have to use special tools to combat that cold air reaching the ground.

“We have a frost fan that we can set up,” says Muzykowsky. “And we’ll try to bring in some of that hot air that’s trapped on top of the cold air to try to mix that up. So we have that buffer in there.

The advice for home gardeners is that if you have plants that can fit inside, bring them. If not, try covering them as this will help prevent freezing. Nothing is guaranteed with the unpredictability of the weather, and farmers say Mother Nature wins out 100% of the time.