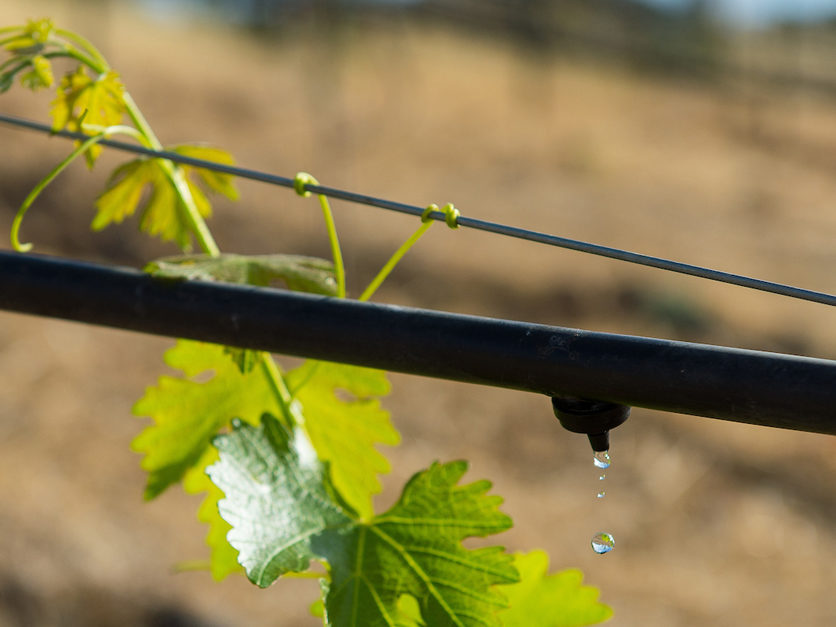 The 2021 drought taught California a new lesson in water management. Rising spring temperatures and drought-shriveled ecosystems have allowed less water to flow into reservoirs. Now another lesson emerges: crops in the San Joaquin Valley need an extra million acre-feet of water to stay cool in the heat.

“Those are big numbers,” said Josh Viers, professor of civil and environmental engineering at UC Merced, after describing the net water loss from an additional 2.5 inches of evapotranspiration demand spread over five million acres of irrigated farmland in the valley.

Plants need this water to replace moisture lost through evaporation in the soil and through a process similar to respiration, known collectively as evapotranspiration.

Viers was speaking at a recent meeting of the State Food and Agriculture Council and describing the results of an upcoming study. The findings add to a series of new information that the Public Policy Institute of California (PPIC) has incorporated into a guidance note for state leaders that details the impacts of drought on agriculture. and outlines actions the state can take to help farmers adapt.

PPIC will host a roundtable on the topic on Thursday with a community water liaison officer in Gov. Gavin Newsom’s office alongside a Sacramento Valley rice farmer and the general manager of a local irrigation district in the San Joaquin Valley.

According to the brief, general water evaporation is already a significant problem in California. Temperatures in 2021 have soared nearly 3.5 degrees above the 20th century average, creating an additional 3 to 4 inches of evaporation demand and driving an approximately 8% increase in water demand for cultures.

This loss of water will be particularly painful this year, as the impacts of three dry years ripple through the agricultural industry and rural communities.

Last year, water deliveries for farms in the Central Valley and North Coast dropped about 5.5 million acre-feet, more than 40% below the historical average, according to the PPIC. Groundwater pumping has increased by more than four million acre-feet, increasing energy bills by $184 million. While subsidence increased due to pumping, it was at a lower rate than the 2012-16 drought.

Statewide, about 400,000 acres of farmland lay fallow. The Russian River Basin and winegrowers have suffered the brunt of the impact, amounting to $148 million in losses, nearly a quarter of annual revenue. The San Joaquin River and Lake Tulare basins had minimum losses of about 1%.

Many of the same policy brief authors released a report in February showing the drought resulted in the loss of $1.1 billion and nearly 9,000 jobs in California agriculture, with broader economic impacts spanning $1.7 billion and 14,600 jobs.

While surface water deliveries were lower in 2021 than at any time during the previous drought, state and federal agencies have already canceled allocations to the Central Valley Project and the Northeast Water Project. State this year for many growers, leading researchers to believe the impacts will intensify and spread. year.

“It is certain that the San Joaquin Valley will experience more reductions this year compared to last year,” Professor Josué Medellín-Azuara of UC Merced told the food and agriculture council, adding that reservoir levels are lower than last year and that groundwater sustainability plans will limit additional pumping in some countries. areas.

Medellín-Azuara, who authored the PPIC dossier, is working on a separate report that will examine the implications of agricultural land fallowing for the food and beverage processing industries. His lab also examines disparities in average water costs for irrigated agriculture.

Are you looking for the best, most complete and balanced source of information on agriculture? Our Agri-Pulse editors don’t miss a thing! Sign up for a free one month membership.

Citrus growers were able to stay afloat last year by working with exchange contractors to transfer water from the Sacramento Valley through the Sacramento-San Joaquin Delta to orchards in the San Joaquin Valley, according to Casey Creamer, president and CEO of California Citrus Mutual. But it came with “huge costs”, sometimes 400% more than the usual price.

“We don’t know if we’ll have that capability this year,” Creamer said. “It’s a very important concern.”

He noted that the drought comes at a difficult time for the industry. The organization surveyed its members in early 2020, before the pandemic, and found that the average cost of growing navel oranges was $3,300 per acre. A year later it was $3,900, and adding extra packing and shipping costs had increased by about $1,000 per acre. Creamer thinks he’s now jumped to $4,500 an acre due to skyrocketing fuel, fertilizer and transportation costs.

To help farmers adapt to the drought, PPIC researchers recommend several policy changes. They suggest local groundwater agencies urge farmers to avoid pumping in areas that could impact drinking water or replace wells that are at risk of drying up. Measures like these would help farmers who rely on groundwater pumping and indirectly help maintain local economies.

Groundwater recharge projects would add more storage capacity in wet years, and the state could support that by improving storage and transportation structure as well as improving reservoir management, according to PPIC.

The report proposes other policy options to build resilience to drought over longer periods, such as limited groundwater pumping and encouragement of farmers to balance the perennials with annual crops, allowing a greater flexibility for fallowing in dry years. The state could also increase its funding by $50 million for the repurposing of fallow farmland to provide environmental and community benefits.

“It’s the new normal, folks,” Viers said, describing a 20-year empty run in California that ended with just three wet years. “Unfortunately, we are going to have to change the way we do business. We see some nibbling around the edges, but we need big changes in how we approach this.