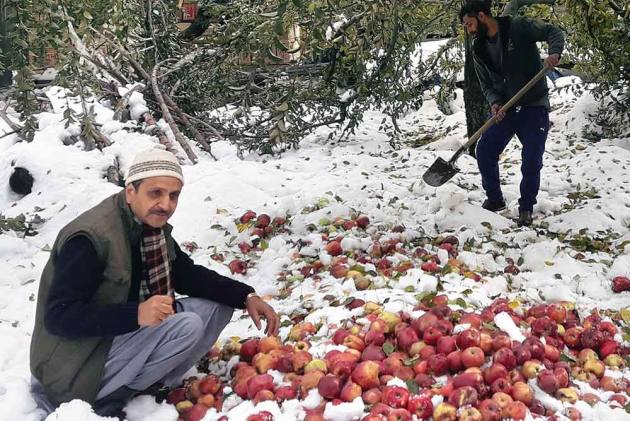 Heavy rains and snowfall in Jammu and Kashmir on Saturday left three people dead and several severely damaged apple orchards. With parts of Kashmir receiving snowfall as heavy rains lashed others, Srinagar recorded the coldest October day in 39 years as the maximum temperature dropped in the valley. Snow and precipitation caused the early onset of winter conditions in the valley.

Of the three people killed, two were women. The three men were killed after snowfall and rains, which started late Friday evening, triggered a mudslide that hit a tent set up by nomads in Noorpora in the Tral region of Pulwama district. Another person was seriously injured in the incident. All three were nomads from Reasi District in Jammu Division.

Meanwhile, two people died and as many were rescued after being trapped in snowfall in the Anantnag district of Jammu and Kashmir, bringing the death toll to five from inclement weather.

Last night, people stranded at Sinthan Pass in the southern Kashmir district were rescued, they said.

Officials said moderate snowfall was recorded in the Gulmarg, Sonamarg, Pahalgam, Shopian and Gurez regions of the valley.

Minamarg and Drass in Ladakh have also received snowfall since Friday evening, they added.

Officials said light snowfall was reported in some areas of Pulwama and Kulgam districts, while some areas of the plains, including the summer capital Srinagar, received sleet.

They said the tourist resort of Pahalgam in the Anantnag district of southern Kashmir received about five inches of morning snow at 2:30 p.m., while the resort of Sonamarg in the Ganderbal district of central Kashmir, recorded seven inches of snowfall.

Snowfall caused extensive damage to apple orchards in parts of the valley, particularly in Shopian and Kulgam districts in southern Kashmir, where most of the horticultural produce had not yet been produced. harvested.

CPI leader (M) MY Tarigami expressed concern over the losses caused to orchards by untimely snowfall and demanded immediate compensation for them.

â€œA large number of fruit trees have reportedly suffered damage from the unusual snowfall seen in several parts of the Kashmir Valley. Reportedly, 50 percent of the fruit had not yet been harvested in the twin districts of Shopian and Kulgam. There should be an immediate assessment of the losses suffered by the orchards, â€Tarigami said in a statement.

He said the government should delegate teams of experts to assess the losses, especially in southern Kashmir which has been hit the hardest.

He also expressed his grief over the deaths of three members of Tral’s nomadic family.

Meanwhile, due to rain and snow, the maximum temperature in the valley dropped on Saturday.

Srinagar recorded a high of 6.6 degrees Celsius, which is the coldest October day in 39 years. The last time the city recorded a maximum temperature lower than that of Saturday was 5.0 degrees Celsius on October 28, 1982.

The meteorological service said rain / snow had diminished significantly in northern and central Kashmir and in many parts of the Jammu region on Saturday evening.