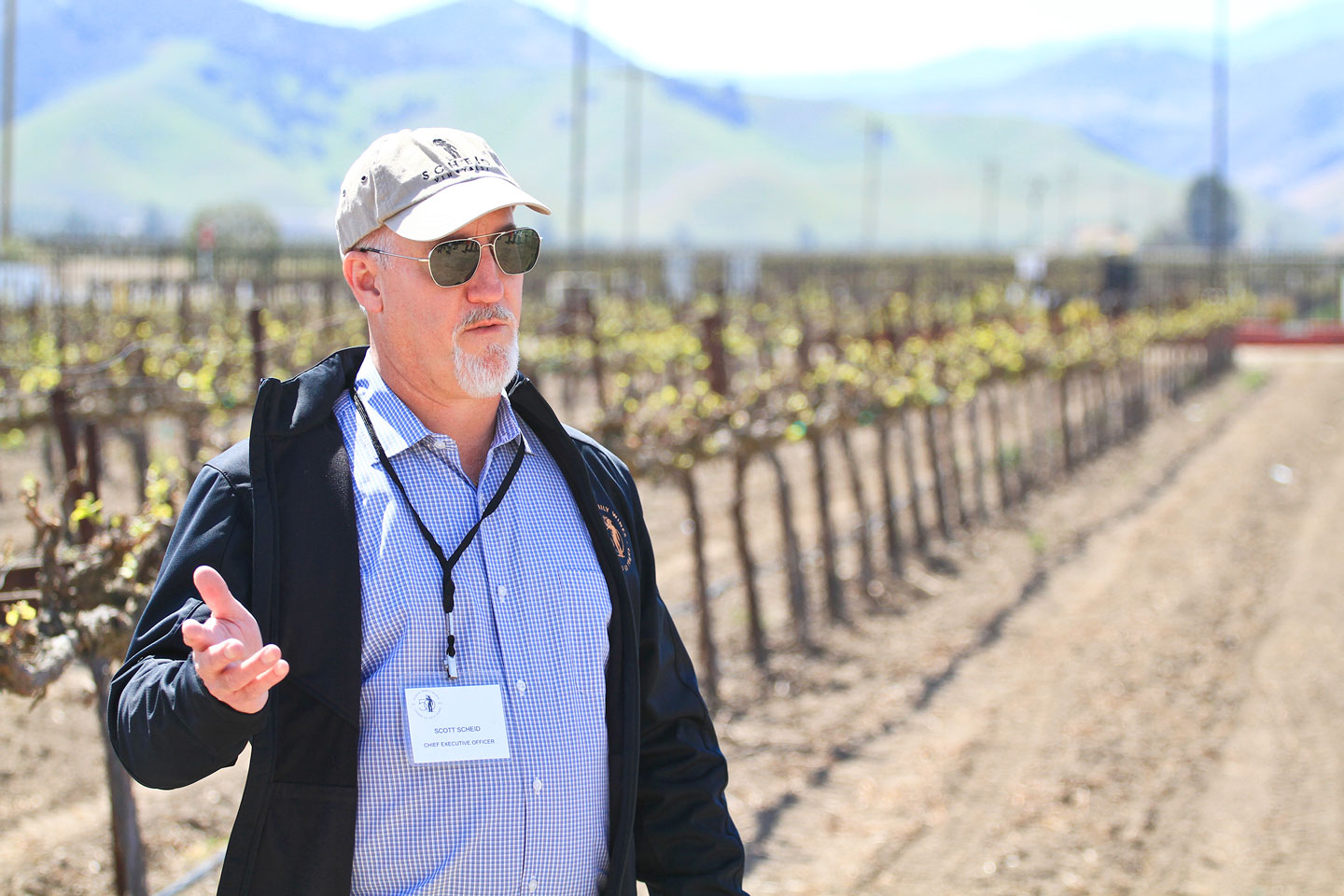 GREENFIELD — Scheid Vineyards is celebrating its 50th anniversary this year and recently hosted an Earth Day visit to its winery — just off Highway 101 between Greenfield and King City — to discuss its growing sustainability efforts environmental.

During the March 25 tour, scheduled ahead of Earth Day on April 22, management reviewed the winery’s enduring efforts that combine technology and sustainability, from the giant wind turbine standing above the vines from Greenfield to the smallest insect larva used as a pest control.

“We have enough vineyards to experiment with,” President Scott Scheid said. “With 3,000 acres of vines that we cultivate, there are always opportunities in our different climates to put together rows and do repeat trials over the years.”

Craig Winn, Director of Viticulture and Technology, added, “We have four of the five crop type regions covered within one company, which doesn’t happen very often, so we’re able to play with techniques.

“There’s a difference between avant-garde and avant-garde,” Scott Scheid said of the importance of testing ideas, from manipulating insects to developing wine aromas.

Executive Vice President Heidi Scheid said the amount of kilowatt hours generated by the turbine is “the equivalent of 3,125 tonnes of carbon pollution”. She compared that to taking 350 cars off the road or carbon sequestering 47,000 tree seedlings over 10 years.

Scott Scheid said the excess energy powers the equivalent of 125 homes. Although the vineyard draws electricity from PG&E on windless days, he noted that the turbine produces 200% of the electricity needed by the winery each year, with excess electricity fed back into the grid.

Although solar power was considered, Scott Scheid said wind made more sense with the area being so windy.

The company worked with the Ventana Wildlife Society to ensure the turbine blades would not interfere with condor flights in the area. Crops can also be planted next to the base of the structure.

Winn reviewed the growing environmentally conscious efforts, including the announcement that the company has started using drones for pest control. Vineyard workers can spot pests and identify them, and then the appropriate predator or parasitic insect used to combat that pest can be released specifically on the infested row or rows.

An example given by Winn was cryptolaemus, which has larvae that feed on scale insects that would otherwise harm plants. He explained that the insect control tests were part of the company’s mission to “provide quality fruit at a reasonable price and be environmentally conscious”.

By using insects to control pests, the company sees a reduction in the need for chemical solutions.

Winn said recent price increases for insecticides, as well as other agricultural supplies, are further spurring the desire to reduce the amount of chemicals released not only to the vines, but also to the region’s environment. With this broader scope in mind, specific pest control efforts also reduce damage to non-target insects.

Another pest control effort Winn reviewed was the agrothermal system, which can be outfitted on a tractor to spray rows with a paraffin-like oil with heat. He also said inter-row weed control can be achieved with low blades on tractors, rather than spraying herbicides.

Winn noted that with harmful chemicals, it can sometimes be years before a grower sees the impact of what they put in the environment.

“Everything we use right now is needs-based,” he said not only of pest responses that can be narrowed down to individual rows, but also of the use of monitoring technology, including the sensors, to know the conditions of the water, the soil and the vine.

He compared today’s precision methods to older farming practices, which were more “all-in, all-out” when it came to responses.

“It’s all about precision,” Winn said, explaining that if a vine has a need and its neighbors don’t, the company can meet it on its own.

Reducing specific responses requires technology to be in place to monitor the vineyard and take measurements several times a day. It also takes interaction and communication, with Winn noting that Scheid is “filled with communication.”

Winn also reviewed cultivation practices, which include responsible use of resources. The marc of the harvest, the mixture of plant waste left after the harvest and the first vinification, is fermented and transformed into compost.

Applied to the rows, it not only provides nutrients to the vines, but also acts as a mulch to reduce weed growth. A drip irrigation system means less water used than irrigation for maintaining the vines.

In addition to active monitoring and responses, Winn said the company encourages wildlife to participate in growing efforts. Insect rows are used to attract desired insects to the vines.

While grapes are self-pollinating, bees are always sought after. The company also had 174 owl boxes, including a barn owl box near the tasting room.

There are also perches for predatory birds. Winn said the raptors do an excellent job of controlling rodents, from golden and bald eagles to red-tailed hawks and a variety of owls.

“In some areas, we’ve encouraged coyotes to come up with water sources for them to feed on squirrels and rodents,” Winn said. He explained that coyote puppies might chew lines while teething, but the loss is acceptable since line breaks are part of the maintenance routine anyway.

In conclusion, Heidi Scheid said that making innovations requires having a “continuous improvement mindset” due to the cutting edge of agtech always going the extra mile. Scott Scheid added that the company’s innovation and technology are all about product quality.

Chaka Uzondu: on poultry manure and the National Fertilizer Board