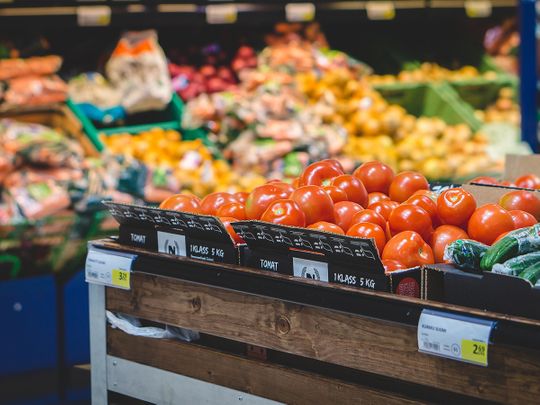 Save Money Shopping in Dubai: The Best Weeks to Buy Poultry, Meat, Seafood, Fruits and Vegetables!

Dubai: When surveying prices over the last 18-16 months, Your Money found that the cost of groceries was largely under control. When analyzing the cost of poultry, seafood, fruits and vegetables, here are some useful models that can help a buyer save money in the short term and even more in the long term.

During these months, it was observed that it was profitable to buy fresh chicken at the start of the week, especially most Mondays. On the other hand, the cost of seafood and vegetables was considered to be significantly cheaper in the middle of the week, and profitable fruits could ideally be purchased towards the end of the week.

Should I be worried about food price inflation?

As corn, wheat, soybeans and vegetable oils – which form the backbone of much of the world’s diet – become dramatically more expensive, warning signs have sounded for purchasing budgets global.

With global food prices already at their highest in a decade, this latest jump is being closely watched as staple crops have an ever-present influence on grocery store shelves – from bread and pizza dough to meat. and even sodas.

Soaring commodity prices are having a broad impact on households and threatening a global economy trying to recover from the damage of the coronavirus pandemic. They help fuel food inflation, bringing more pain to families who are already struggling with the financial strain of losing jobs or income.

Emerging markets, in some cases already under pressure from weaker currencies, are particularly vulnerable as food costs account for a larger share of their spending. For the poorest and often politically unstable countries, the commodity boom threatens to further fuel global hunger.

Will food prices in the United Arab Emirates increase due to inflation?

The United Arab Emirates, which imports 90% of its food and allows its economy ministry to control prices, has often considered controlling the prices of certain foods whenever soaring crop prices increase inflationary pressures in other countries of the world.

Although we are nearing the end of the winter season in the UAE, no noticeable price changes have been observed, due to inflation or otherwise. However, prices do not differ significantly for most months of the year as the government limits costs and prevents any major price spikes.

Pick up seafood every Wednesday!

If you were wondering what part of the week would be ideal to buy seafood at a lower cost than usual, the answer is always mid-week. A study of prices over the past 18 months has proven that the cost of fish and shrimp mainly drops on Wednesdays, while prices are higher at the beginning of the week.

The price of all seafood variants, whether sea bass, hamour, trevally, salmon, sea bream or small prawns, fell in the middle of the week, during the 72 last weeks. So this would be good news for seafood lovers who were looking for profitable shopping days!

Moreover, when analyzing the prices of these species of fish, it was also observed that the days when the prices remained consistently high were at the beginning of the week, especially Mondays and sometimes Sundays – so it would be prudent to avoid stocking up on seafood soon after. weekends, to save your pocket and your finances.

If you were wondering which day of the week would be the best to buy fruit at a cheaper rate than usual, studying prices over the past 18 months has also shown that the cost of all fruit has become less expensive towards the end of the week. , making the weekend a great time to go fruit shopping!

A weekly trend was also observed in which the price of bananas started falling around the middle of the week and the cheapest during the weekend, just like oranges. The cost per kilogram of lemons has remained largely under control in recent months.

This would be considered good news for those looking for profitable days to buy citrus! A similar trend appeared when analyzing the cost of apples and limes, which fell slightly towards the end of the week and became relatively more expensive at the beginning of the week, especially on Sunday and Monday.

For fruits that fluctuated, namely bananas, oranges and apples, prices were seen higher at the start of the week on Sunday, and they became cheaper towards the end of the week. Again, this proves that the weekend is the perfect time to buy fruit!

Most vegetables are cheap mid-week!

When it comes to vegetables, prices for items like tomatoes, potatoes, cucumbers and lettuce have mostly fallen mid-week over the past 72 weeks, or just over 18 months.

The cost of onions, another common household staple, which has remained largely the same in recent months, has seen prices fall to Dh1.5 per kilogram. This would be seen as good news for people looking to plan their grocery spending in advance.

The cost of fresh chicken drops most Mondays

When analyzing the cost of poultry, beef and lamb over the past 72 weeks, it was observed that it was profitable to buy fresh chicken mainly at the beginning of the week, when the The cost of other poultry products like chicken and frozen eggs has remained the same over the past 18 months.

The price of fresh chicken continued to drop at the start of the week, mostly every Monday, making it a great time to buy and stock up. However, there were a few instances where prices also fell just before the weekend.

So be vigilant when shopping this weekend, bearing in mind that one kilogram of meat is currently at a fairly competitive price point of Dh13.3..

On the other hand, the price of beef and lamb, whether variants from Australia, India, Pakistan or the United Arab Emirates, remained the same, as was the trend. , and has not experienced any price fluctuation, over the past 18 months.

Latest prices per kilogram of each variant of fish available on the market:

Latest prices per kilogram of each variant of beef and lamb available on the market:

Beef and lamb prices, whether variants from Australia, India and Pakistan, were next, as of Tuesday.

Latest prices per kilogram of each variant of fruit and vegetables available on the market:

As for fruits, the starting price per kilo of bananas is currently priced at Dh4, oranges are Dh3 and apples are Dh4.5. On the other hand, the relative prices for vegetables include – potatoes costing Dh2.5 and lettuce at Dh5. Moreover, the price of one kilogram of lemon is 3 Dh, while lime costs 5.5 Dh.

How to keep crops alive in a hotter, drier world