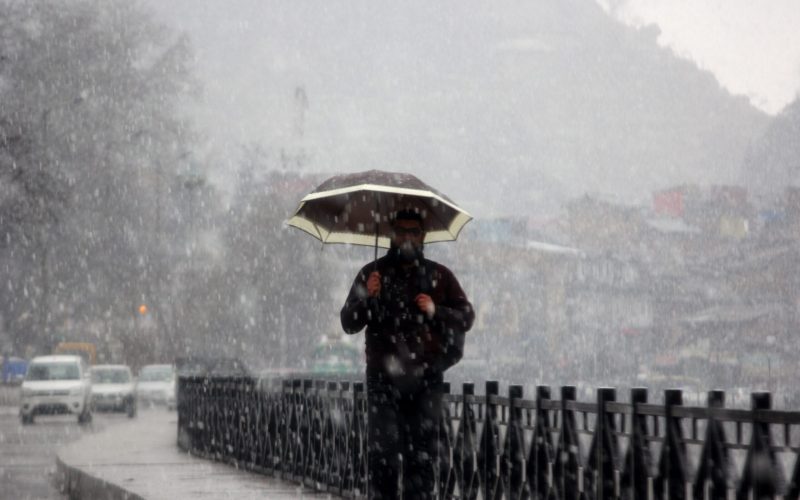 Jammu Tawi, October 23: Heavy rains and a hailstorm on Saturday wreaked havoc in most parts of the Jammu region. The mercury fell five to six degrees below normal when the upper parts of the area received fresh snow. There are reports of serious damage to crops and orchards in many areas, however, no reports of injuries or casualties were received until this report was filed.

The Jammu-Srinagar national road was closed due to landslides triggered by heavy rains near the More cafeteria in Ramban district. power supply since early morning.

Reports from different districts indicated that crops had been destroyed and many mud houses had been damaged. In the plains of Jammu, standing crops have been severely damaged; and many regional and link roads were flooded, causing inconvenience to commuters. In the lower areas of the city, rainwater gushed out in many houses.
The MeT has forecast heavy rains for Saturday and Sunday.

In the area of ​​towns and civil lines, there are reports of street congestion and nallahs. In many communities, overflowing drainage water entered homes and caused extensive damage.

Most places in the Kashmir Valley experienced further light to moderate snowfall as plains hit by relentless rains further lowered temperatures and disrupted normal Saturday activities.
A meteorological department official said moderate rainfall over the plains and light to moderate snow was recorded over the middle and upper parts of Jammu and Kashmir and Ladakh over the past 12 hours.
He said Gulmarg, Pahalgam, Shopian, Zojila, Drass, Zanskar, Gurez and other upper stretches received moderate snowfall on Saturday.
According to official sources, Affarwat has received more than a foot of snow while the famous ski resort of Gulmarg has experienced a few inches to the delight of tourists who go there.
The sources said Gulmarg was packed with tourists, most of whom had come to experience life in the snow. It was still snowing lightly there, the sources added.
The MeT office said the upper part of Pahalgam recorded moderate snowfall while the plains had a few inches. The tourist destination of Sonamarg also received moderate snowfall, they added.
He said Zojila, Drass and Zanskar in Ladakh also received moderate snowfall leading to the closure of the Ladakh highway.
The plains of the Kashmir Valley have been hit by moderate rains since Saturday evening, causing congestion on many roads and low lying areas. Srinagar recorded 31.6mm of rain, while Qazigund on the Srinagar-Jammu state road received 58mm of rain until 8:30 a.m., an MeT official said.
He added that Kokernag and Banihal in southern Kashmir also received 50mm and 48mm of rain respectively, while Pahalgam 43.2mm and Gulmarg 23.8mm received rain during the period.
It was still raining in most parts of the Kashmir Valley, the Met Office said.
The system is likely to persist for the next eight to ten hours and will gradually wane afterward. He said a significant improvement in the weather would occur from October 24 afternoon and remain dry until November 2, the MeT office added.

Snow and rains cause major damage to orchards