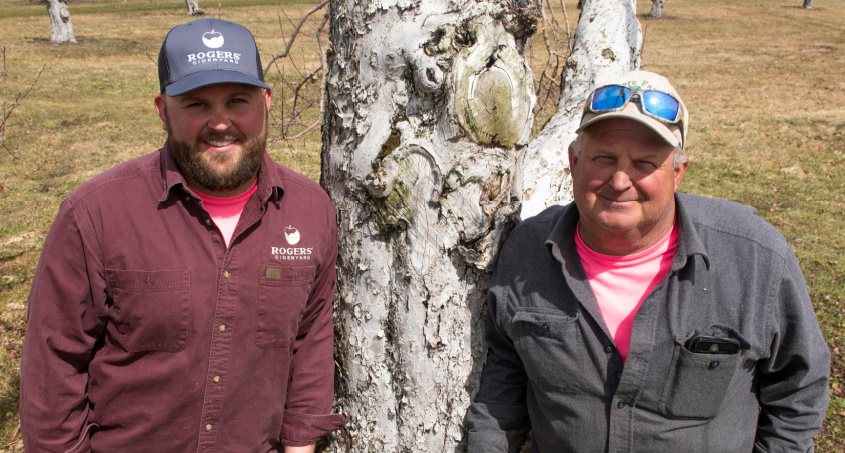 JOHNSTOWN- Todd Rogers was just 10 years old when his father, Don, bought what would become the Rogers family orchard in 1970.

Todd started working on the farm and didn’t stop. His two brothers and a sister went to college, but he wasn’t interested. He preferred agriculture.

Rogers learned from his father and took classes at Cornell University. He also learned from some of the vendors he buys supplies from.

“Between those three things, we’re as good as it gets,” he said. “If you want to learn, there are many ways to do it.”

The orchard still houses some of the old standard apple trees that were planted from 1942 to 1946. These types of trees can reach a height of 30 to 40 feet. Rogers still tends to them, but he no longer plants these large trees because they are too difficult to harvest.

Every year after Christmas, Rogers and his son, Mitchell, who has worked alongside his father since he was a child, begin trimming the thousands of trees in the orchard, a job that takes months. After pruning, the brush should be picked up and transported. Rogers also sells apples to local schools all winter.

Rogers said the hardest part of his job is keeping the trees alive and healthy.

“Between the humidity, the cold, the hail and the fire blight, you really have to be careful with the apple trees,” he said.

Fire blight is a disease that can kill a tree. The disease often begins following hail or heavy rain when a tree may receive an injury that allows the deadly Erwinia amylovora bacteria to enter. The disease’s nickname comes from how quickly it can spread.

“Four to five years ago, fire blight was all over the Northeast,” Rogers said. “He can, if you’re not careful, wipe out the whole orchard.”

Over the years, Rogers has added other crops in addition to apples, including blueberries, plums, tomatoes, squash, sweet corn, pumpkins and other seasonal vegetables, which he sells in the orchard store. It also carries a variety of other local products such as meats and cheeses.

And since 1992, when he bought his own cider press, the farm has been producing its own apple cider, which is a customer favorite along with homemade cider donuts.

During the orchard’s busy fall season, Rogers employs about 20 people. In winter and spring, this number drops to three or four.

A THIRD GENERATION
Before attending Fulton-Montgomery Community College and the State University of New York at Cobleskill to study agricultural business, Mitchell Rogers wasn’t sure if he wanted to go into farming.

“Going to college, I really made up my mind,” he said. “I love doing it. I love everything about it.

Using what he learned in school, Mitchell hatched a plan to expand the business by adding a hard cider house five years ago.

“Without the business experience, I wouldn’t have been able to design this and get started,” he said.

Some of the oldest trees in the orchard are good for cider, and Mitchell and his father planted particular varieties of trees just for hard cider. Now he makes about 1,500 gallons of hard cider a year, which he sells to the Rogers cider house and some local restaurants.

People can come to the cider house to taste several different flavors of hard cider, including traditional apple, ginger, strawberry-jalapeño, blueberry, and peach.

“We also make a wild variety where we go up into neighboring land and look for wild apples, and make hard cider from those,” Mitchell said.

The cider house also serves a variety of local craft beers and a rotating menu, including items such as the “mac attack burger”, white chicken chili, grass-fed burgers and their own pork hot dogs with homemade meat sauce, among other starters.

Todd Rogers enjoys running the orchard in large part because he enjoys being self-employed.

“One of the benefits of being your own boss is that I don’t have to punch a clock per se, but when things need to be done, you need to be there,” he said.

“I love everything about farming and I love working for ourselves,” he said. “It’s just a completely different environment than working for a boss.”

At 62, Todd Rogers is looking forward to retirement in a few years, and Mitchell will take over the farm as the third generation owner.

Plus: Local Premium | All news

More from The Daily Gazette: