After being closed for two years, Moore’s Orchards will reopen their Apple Haus this fall. The little store is located on Sasse Road, just five miles south of Midland. Orchard manager Steve Heilig says the COVID-19 virus in 2020 and a frost that “completely wiped us out” in 2021 kept the shop closed. Heilig works for Terry and Carleen Moore, the owners of the orchard. 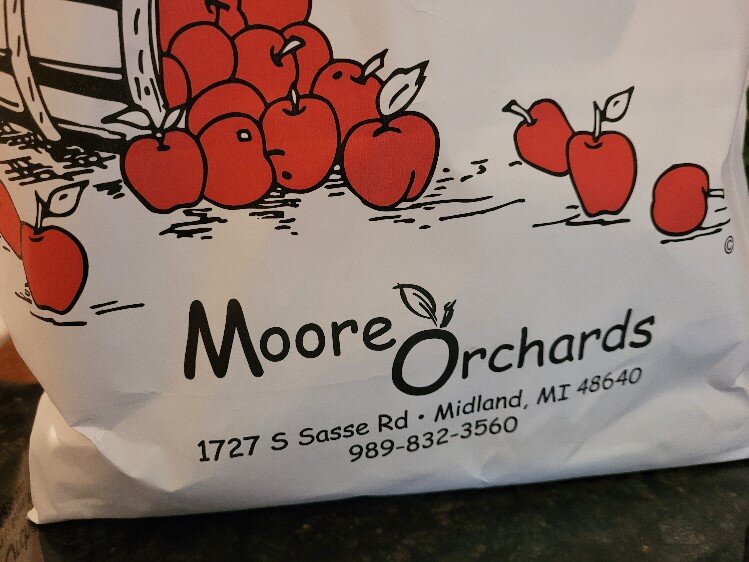 The Apple Haus will be open Thursday through Saturday, September 29 through November 5, from 9 a.m. to 5 p.m.

This year they are looking at a huge harvest. In an article published in the Michigan Farm News, a record crop is projected at 30 million bushels in the state, nearly double last year’s crop of just over 15.6 million bushels and several million more than the 24 million average . Michigan trails only Washington and New York as top apple producing states. Heilig says, “There was no spring frost. The flowers were great. The bees have done well..great growing season. The best since 2016.”

The Apple Haus is scheduled to open September 29 and will remain open until November 5, three days a week, Thursday through Saturday, 9 a.m. to 5 p.m. Heilig’s wife, Julie, will manage the shop. Heilig says he will offer up to 25 varieties of apples for sale at any one time. As the apples mature, they will add two to three varieties each week. Apples can be purchased in several different volumes, ranging from a half peck, which is a small bag that can hold up to 10 apples depending on their size, up to a bushel, which holds about 42 pounds of apples. Hot and cold cider will also be on sale as well as apple cider donuts. Moore says, “They’re as good as anything that’s ever crossed your lips.” 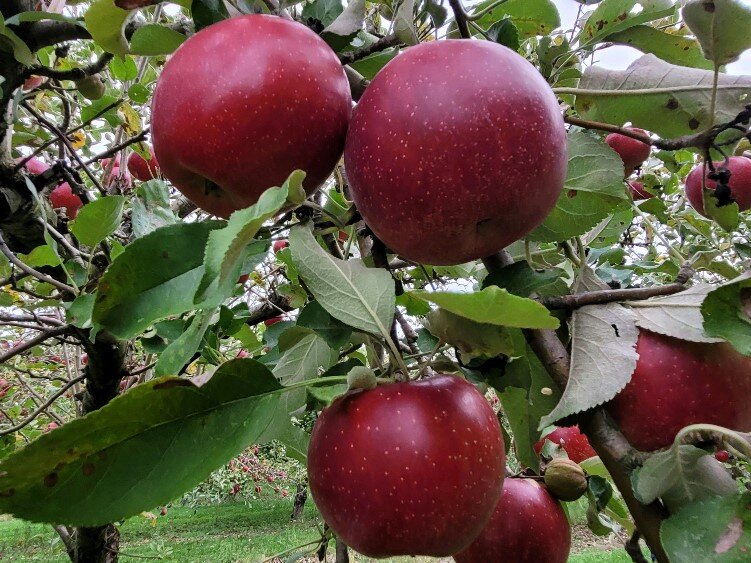 Opalescent is a dark red all-purpose apple, introduced in 1880.
Moore Orchards has 2,500 trees covering 22 acres. They include 90 different varieties apples. Part of the property belonged to Moore’s father, Albert, and had only six apple trees. Moore added more than 1,200 trees in two years in the early 1990s.

This year they added snow candy and crimson crisps. It can take up to five years for a tree to bear its first fruits. A Northern Spy can take 16 years to produce apples. The process of starting a new tree involves taking a scion, or one to two foot branch from a tree, and grafting it onto a rootstock. This then grows one to two feet per year. Most of their trees are considered semi-dwarf, reaching a height of 15 feet. If smaller, a dwarf tree, deer are a major concern. They stake and fence all new trees. Moore says, “If we don’t, he’s gone.” They also install a small black sleeve at the bottom of saplings to protect against mice. The tallest trees, called standards, can reach a height of 25 feet. Heilig and Moore say these become difficult to manage.

The apples are sent to the washer/purifier.
Moore says they use a “minimal amount” of spray, insecticides and fungicides to treat the apples. Their main concern is apple scab, a fungus. No machinery is used to harvest the apples. They are all handpicked. Referring to himself, Heilig, and a third staff member, Moore says, “It’s the machines here.” After being picked, the apples pass through a washer/purifier, then are sorted by hand. Any apple that falls to the ground stays on the ground or is used as livestock feed. A big concern at this time of year is hail which can damage a crop awaiting harvest. Trees locally are stressed right now because there hasn’t been enough rain. Apples and leaves begin to fall to the ground.

The orchard has kept Moore, a Midland native, busy outside of his regular job, serving for 31 years as president of MidMichigan Health Systems. Helig jokes: “It’s a very expensive hobby. Moore is known for telling a story about the first steps you should take if you’re considering owning your own apple orchard. It involves buying a Shop-Vac, bringing it home, plugging it in, then turning it on to suck all the cash out of your wallet. Moore adds, “Make sure you throw it (the money) at the end of the year.”

Heilig retired in February after a 25-year career, also with what is now called MyMichigan Health. He was the landscape supervisor. He worked for the orchard, also for 25 years. Heilig, a graduate of Sanford-Meridian High, says, “They needed someone to come help them. I never left.” He now owns a 33-acre property just north of Moore Orchards. He has 100 trees with seven different varieties of apples. 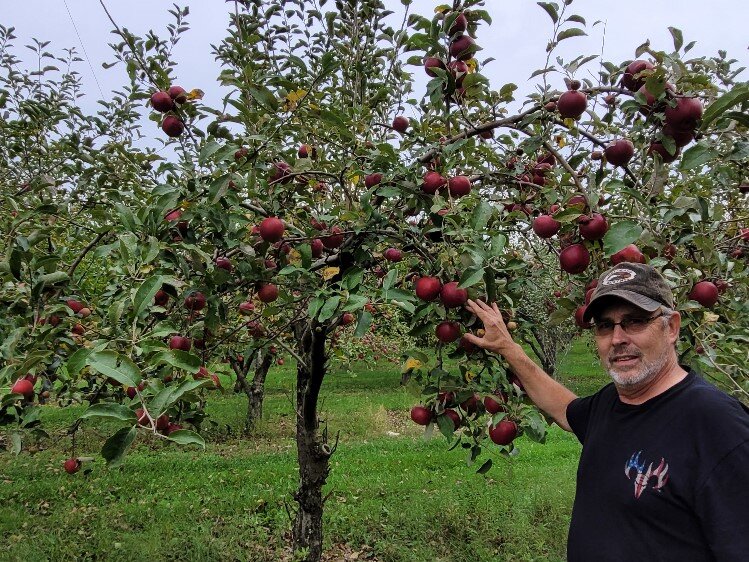 Steve Heilig is the manager of Moore Orchards and has worked there for 25 years.
Heilig and Moore share a passion for apples and a lot of knowledge. They encourage bakers to mix together a variety of apples when baking a pie. Ditto for cider and applesauce. Moore says, “Add a Jonathan for flavor.” Heilig says, “The Cortlands are an old standby for pies.” Other favorite pies include 20 Ounces, Northern Spy and Opalescents. Moore says, “You can’t find them anywhere else.”

For more on Moore Orchards, keep an eye out for their Facebook page for updates this fall. There are two other orchards located near Midland. apple orchardlocated on Wilder Road in Williams Township, just east of Midland, and Jacques Verger, located on Iva Road, northwest of Hemlock. Both have stores that are open for the fall season.