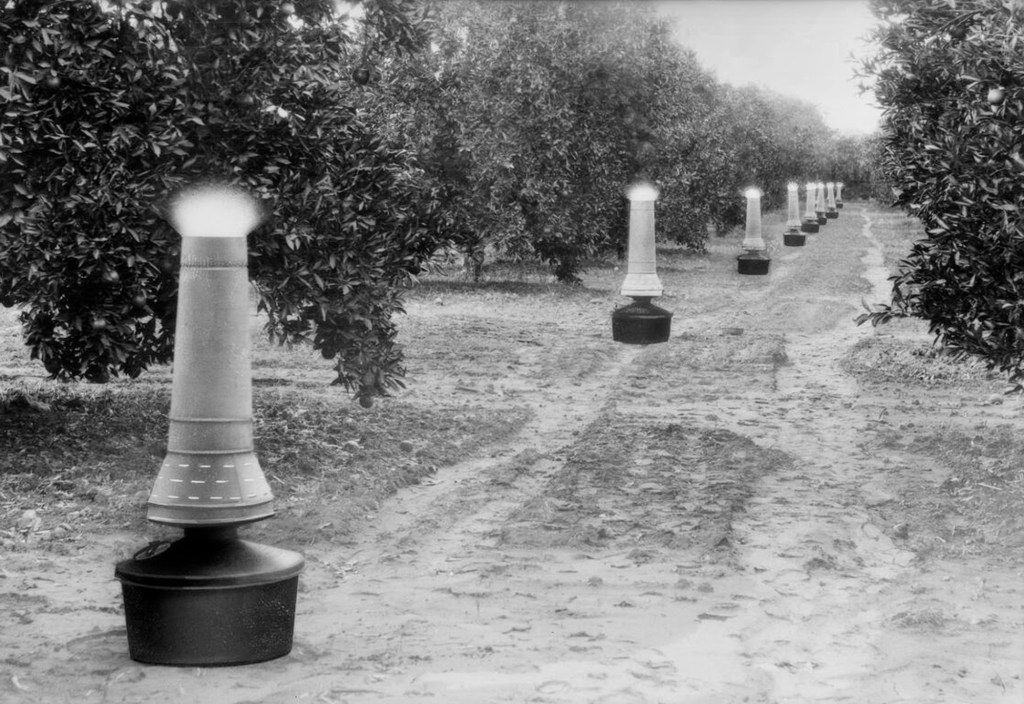 But early citrus growers soon learned that on rare occasions Southern California was subject to extreme frosts that could wipe out entire crops and ruin orchards.

Citrus crops and the fruit trees themselves are susceptible to damage when temperatures drop to – or below – 20 degrees for an extended period.

With no long-term history of winter temperature ranges or accurate weather forecasts, early citrus growers were often caught off guard when severe frost conditions occurred. Growers have struggled to find ways to protect their crops by using various methods to create artificial heat.

The practice of “smearing” with the smoke from damp or oily fires was used by Native Americans as a cleansing ritual, and it was also widely used by farmers to control insects on crops. The practice was adopted by California farmers in the mid-1800s to protect various fruit crops from frost damage, but it was not a proven success.

Early attempts at heating orchards included the use of portable open fires carried through orchards on wagons, steam boilers, hot water, and other similar tactics. All of these methods proved impractical and were not long-term solutions.

Orchard heaters or “burr pots” as they were first called, were developed in the late 1800s in California citrus orchards to increase the temperature around trees and prevent damage from the freeze. Beginning as large pots of hot petroleum products, the devices evolved into more sophisticated outdoor “heaters” that could be measured and regulated manually.

In the early 1900s, citrus growers and inventors in Southern California improved on open macerators by adding lids, adjustable vents, and chimneys.

Despite reports of orchard heating, many Southern California citrus growers did not believe freezing conditions in their region could ever reach such destructive levels, and they chose not to own or maintain any. smearing equipment.

Mother Nature stepped in with a dose of reality and provided the first major need for manure pots and orchard heaters with the Great Frost of 1913.

On January 5, the temperature in parts of the Highlands and Redlands dropped to a record low of 17 degrees. Citrus growers had little warning of the impending frost, and the small percentage that had functioning smudge pot operations scrambled to keep them running.

Lighting the smudge pots was no easy task, and “smudge teams” were recruited to manually fill and light each heater. The pots had to be closed each morning when the temperature exceeded the danger zone, and relighted in the evening if the temperature dropped. There was usually enough fuel in a smudge pot—about 3 gallons in the first jars opened—to run for two nights, and then they had to be refilled.

The freezing temperatures created a frenzy among the companies supporting the orchards. Oil to power the mud pots soon ran out and, fearing huge losses on citrus shipments, the railroads brought in extra tank cars.

The severe cold finally hit on January 8, but the frost had already destroyed much of the Southern California citrus crop. California’s overall citrus production fell 55% in 1913, and many farms and supporting businesses were ruined by the damage.

Only a fraction of existing orchards could muster a smearing effort during the frost of 1913. But even the small percentage of smudges created a noxious layer of thick black smoke that blanketed Southern California and prompted some towns to join or intensify their efforts to ban the process.

The Great Frost of 1913 created a turning point for orchard heating and preparations for future frosts began on a large scale.

In July 1913, the Pomona Fruit Growers Exchange began constructing a 420,000 gallon oil tank to expand its existing oil storage capacity and improve oil delivery to orchard heaters in an emergency.

In late September 1913, 20,000 orchard heaters arrived in Los Angeles, and the delivery was only the main delivery of the one million heaters that had been ordered for Southern California.

The Sheu Company of Upland (still in business today) manufactured its smokeless orchard heaters by the carload, and in May 1920 ran advertisements stating that nearly 40,000 units were available for shipment.

When the Great Frost of 1922 arrived, it seemed that many citrus growers had forgotten the lessons of 1913 and were once again caught off guard and without orchard heaters. Some producers had postponed the investment, counting on improved forecasts, radio communication and luck.

The catastrophic frost of 1922 caused a loss of about 50% of California’s total citrus harvest, which again caused a rapid increase in the purchase of orchard heating equipment. In 1927, storage tanks for orchard heating oil had a capacity of 47,620,681 gallons and there were over 2,000 wagonloads of oil ready to be dispersed.

Citrus cultivation in Southern California began to decline significantly after World War II, when the region began a huge population and housing boom. However, citrus is still a major crop in other parts of the state, and according to 2020 reports, California produces about 40% of the total citrus crops in the United States.

Heating of orchards continues to be a necessity and new methods such as wind turbines have been developed. Wind turbines have been widely used since the 1930s and are more cost effective than orchard heaters. They use large propellers to move large amounts of warmer air down into the orchard.

Today, the design and use of orchard heaters are regulated by various air quality districts, and they are often used in conjunction with other devices such as wind turbines. But even with new technologies and regulations, old-fashioned oil orchard heaters are still in orchards, keeping Jack Frost at bay.

Mark Landis is a freelance writer. He can be contacted at [email protected]