Today, Ms. Dinh Thi Phuong Khanh, Deputy Director of the Department of Agriculture and Rural Development of Long An Province, said dragon fruit prices are dropping sharply as they cannot be exported to China. . Due to the low selling price which is not enough to cover production costs, many households have cut and turned to the cultivation of yellow apricot trees and other fruit trees…

As reported, dragon fruit growers in Long An and Tien Giang provinces have currently reduced the area of ​​dragon fruit to fruit trees and some other trees.

Mr. Truong Quoc Phuong from Hamlet 7, Vinh Cong Commune, Chau Thanh District, has been growing dragon fruit for nearly 10 years in an area of ​​more than 10 hectares. The family spent a lot of fertilizers and medicine to treat dragon fruit plant diseases, not to mention the cost of hiring workers ranging from 35,000 VND per hour to 40,000 VND per hour.

Mr. Vo Thanh Long said the commune has around 800 hectares of land for growing dragon fruit. Currently, about 10 percent of the dragon fruit acreage is felled, mostly old plants. People cut and plant other fruit trees such as papaya, green-skinned pomelo, coconut, custard apple, and guava. 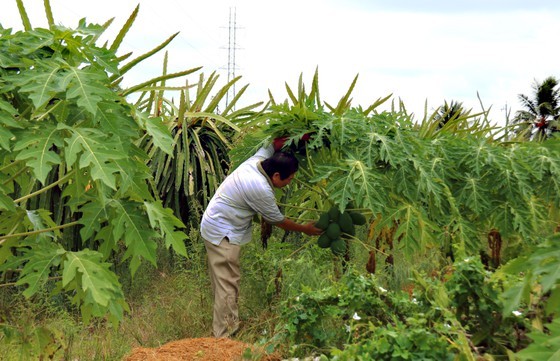 In the coming times, the locality will move towards the cultivation of dragon fruits according to VietGap standard and apply high technology to have a direction to move exports to other countries such as India, Japan, the United States…not completely dependent on the Chinese market, Chairman Long revealed.

Nguyen Quoc Trinh, chairman of Dragon Fruit Association of Long An province, said that due to the Covid-19 epidemic, the largest dragon fruit consumption market in our country, the China, has been frozen for over a year.

Currently, Chinese consumers still believe in the use of Vietnamese dragon fruit, but due to the country’s “zero Covid” policy, it has been difficult for Vietnamese fruits to be exported to the Chinese market because most of the fruits are exported to China using an unofficial quota. .

Premium quality dragon fruit is sold at around VND 5,000 per kg while other types cost VND 3,000 per kg, which is not enough to cover production costs, growers incur huge losses.

According to Trinh, only when the Covid-19 outbreak is brought under control in Vietnam and China will dragon fruit exports resume as before and growers will make a profit. In the long term, we must expand the market and reduce the heavy dependence on China; at the same time, producers should export to China via an official quota.

In Cho Gao district with the largest dragon fruit area in Tien Giang province of the Mekong Delta, farmers have also cut down the fruit trees.

Mr. Le Anh Thuy, chairman of the people’s committee of Thanh Binh commune, Cho Gao district, said farmers had stopped cultivating nearly 20 hectares out of a total of nearly 600 hectares of dragon fruit in the commune. because the price of dragon fruit could not compensate for the production costs. However, it was mainly old trees that were felled.

In recent years, the agriculture and rural development departments of Tien Giang and Long An provinces have made great efforts to help people eat dragon fruit.

Currently, the departments responsible for these localities are working out a plan to help people keep dragon fruit gardens as well as switch to high-tech dragon fruit cultivation, VietGap standard with the aim of increasing the quality of the dragon fruit as well as create a favorable return for customers .