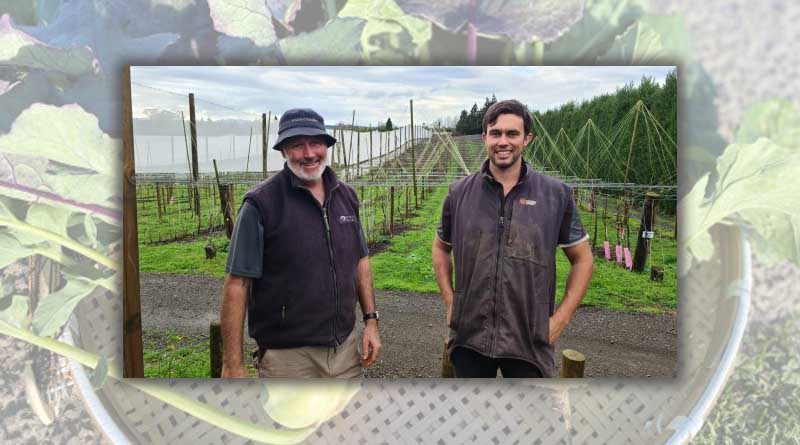 September 27, 2022, New Zealand: The new variety of Zespri RubyRed™ kiwifruit makes up 15% of the Glenview orchard near Hamilton and offers not only high yields but also a continuous work flow for much of the year. ANNE HARDIE talks to growers about the new variety and how it is progressing.

Richard and Robyn Glenn were among the first growers to test Zespri RubyRed Kiwifruit – or Zespri Red as it was initially called – after testing the first red kiwi over a decade ago. PSA erased that first try, so they started from scratch.

Today they have four hectares of new Zespri RubyRed kiwifruit under canopy that are slowly but surely maturing to full production.

Sixty percent of the orchard is Zespri SunGold, with Zespri Hayward adding a further 25% and now Zespri RubyRed covering 15%. An extended harvest of kiwifruit now begins in early March on the red fruit turning gold and then green which together increase diversity for the company.

The Glenns began growing kiwifruit on their hilly land near Ohaupo 43 years ago. Richard says it was a coin toss between dairy and kiwifruit and the latter won. For years they also grew apples for a while, but Richard says their apple harvest never matched other areas such as Hawke’s Bay and Nelson as they had good results for kiwifruit . Zespri’s plant variety rights (PVR) were also a reason to phase out apples and plant more kiwifruit.

Over the years, they have tested a number of kiwifruit possibilities for Zespri, giving the kiwifruit distributor geographical spread in their trials and a variety of growers. It also gave the Glenns an early glimpse of the new red kiwi.

Richard describes it as the fruit of an orchard. It takes work to increase the size of the fruit and all orchard practices must be done on time. It is the job of their son, Matthew, who looks after the day-to-day management of the orchard.

“It’s just about making sure you get the job done on time,” says Richard. “Once you have a mature canopy you need to make sure the thinning is done early. This variety will also need more pruning at certain times of the year.

Warm, free-draining sites are essential for the variety and their own orchard is in rolling loamy terrain. Richard says shelter is also vital and he thinks the canopy greenway is probably the best way to get heat for harvesting.

The original plantings of Zespri RubyRed kiwifruit were spaced 5m by 3.5m wide, but the Glenns later planted them double and they are now spaced 2.5m and 3m wide.

“The reason is that when we double planted them, there were bigger fruits that you can see with your eyes.”

The variety is a smaller fruit than its gold and green counterparts, although Richard expects the size to increase as the crop matures and the variety improves over the years. It takes hard work with a range of tactics to increase fruit size. It’s mostly good orchard management, but he says growers need to be proactive and get the job done on time. They are aiming for a 34 to 35 count for Zespri RubyRed kiwifruit this year and he knows another orchard has achieved a larger fruit size of 32 to 33.

“Over the next 10 to 15 years they will produce better versions and we will get the right fruit size and harvest size,” says Richard.

The fruit may be smaller, but the yields are high. Richard says the three varieties now provide ten months of work for their contractor’s staff.

The Zespri RubyRed kiwifruit starts the season with bud burst between August 20 and 25. By the time they begin flower thinning on the variety, around September 20, the pruning crew is still working in the Hayward blocks. Just like the harvest, the thinning of the flowers changes from red to golden and then to green. Once done, it’s time to start the summer work on the reds. At the beginning of March, the Zespri RubyRed kiwifruit are the first to be harvested.

At harvest, the Zespri RubyRed kiwifruit is a little stiffer to pick from the vines and Richard says it’s even more important than the other two varieties to get it to the coolstore on pick day. Glenview Orchard packs all of its fruit via EastPack in Te Puke and he says they strive to chill the smaller kiwis as soon as possible.

“The day you pick it, you want it in cold storage to reduce the heat in the field,” says Richard.

The fruit itself has a bright red flesh that gave it its name and Richard says its taste is as different from other kiwi varieties as its appearance.

“It has a berry flavor that you can smell and taste,” he says. “I give it to people and they go ‘wow!'”

This year was the orchard’s fourth harvest of Zespri RubyRed kiwifruit.

Richard says growers can expect full production from an open field orchard in four to five years, while grafted Zespri RubyRed kiwifruit will achieve this in three to four years. Their own harvest is still ongoing and he expects to produce up to 11,000 punnets. It won’t match Zespri SunGold Kiwifruit for returns, but it says it will far surpass Hayward.

Zespri had around 105,000 punnets of Zespri RubyRed kiwifruit for its first commercial volumes this year, compared to 70,000 punnets produced last year.

The variety has a shorter shelf life than Zespri SunGold Kiwifruit and Zespri Green, which prompted Zespri to focus on Asian markets due to shorter shipping times.

This year’s crop has been distributed in New Zealand, Japan, China, Singapore and Taiwan as Zespri continues to explore cultivation trials in the Northern Hemisphere.

(For the latest agriculture news and updates, follow Krishak Jagat on Google News)

JUST RIGHT: Orchardist is looking for the perfect size for its operation | Orchards, nuts and vines