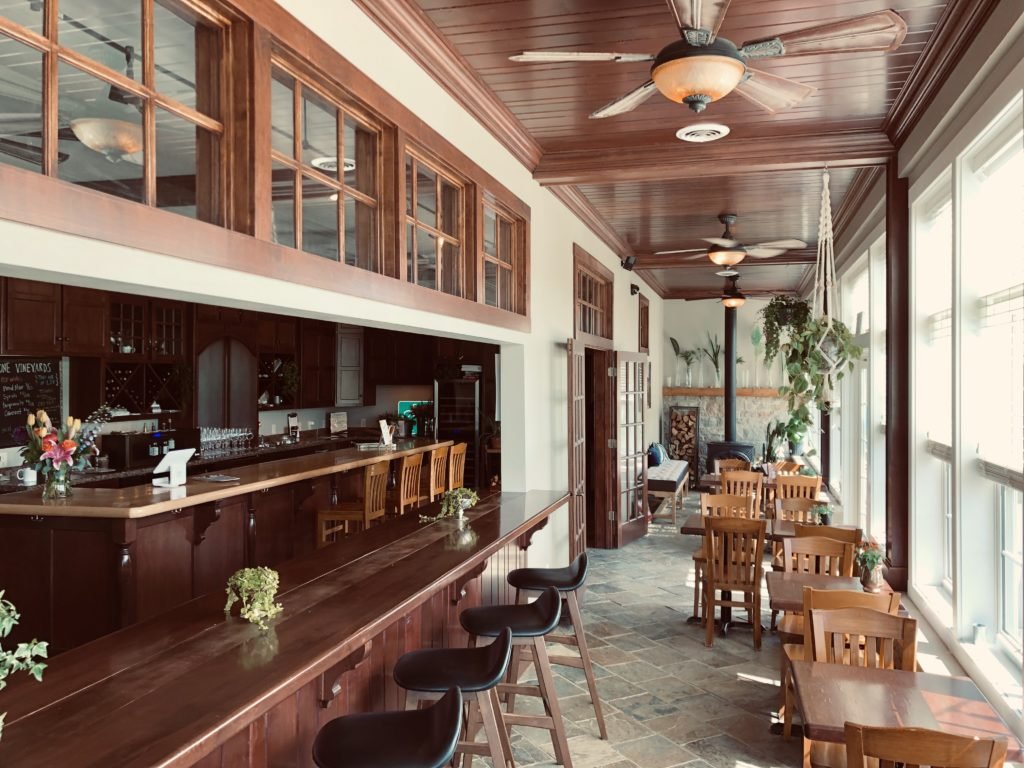 Whether you’re heading to the Green Bay area this fall for a Packers game, leaf-watching, camping, or hunting, a detour to LedgeStone Vineyards and Gnarly Cedar Brewing (6381 Hwy. 57, Greenleaf) offers the opportunity to enjoy a wine featuring Wisconsin-grown grapes, as well as craft beers, in a serene setting just below the Niagara Escarpment.

The escarpment stretches east to west across New York, the Canadian province of Ontario, Michigan, Wisconsin and Illinois. The Escarpment Fall in Wisconsin creates a unique growing climate conducive to crops such as grapes.

Katrina and Adam Magnuson, who bought LedgeStone Vineyards in 2017, currently cultivate vines on eight of their 15 acres. They grow Marquette, Frontenac and Sabrevois, developed by the University of Minnesota’s cold hardy grape breeding program. They also source grapes from West Coast growers to make varietals such as Cabernet Sauvignon and Malbec.

Adam, from Green Bay, and Katrina, from Cleveland, met while studying abroad in Newcastle, New South Wales, Australia. The couple later lived in Denver and co-owned Wine & Whey, a small winery and home wine-making center in downtown Denver. They sold Wine & Whey in 2016 and continued their wine journey across the United States, New Zealand and Western Australia.

“It’s an industry where you will never learn everything,” observes Katrina. “You’re always learning, looking for better ways to make wine, present it, or even drink it. We decided to step out of our comfort zone and find out more.

Meanwhile, Adam’s father had been trying to get the couple to come home, Katrina says. To entice them further, he mentioned that there was a winery for sale in Wisconsin.

Putting Wisconsin wine on the map

The Magnusons bought LedgeStone Vineyards in 2017. “We had a vision,” says Katrina. “We both love music and when we saw the grounds, we immediately imagined gigs. In Australia, vineyards are like playgrounds and part of people’s way of life. We wanted to capture that.

Katrina credits the former owner of LedgeStone with choosing the property and planting the red grape varieties Frontenac, Marquette – one of the most well-known and cold-hardy hybrids – and Sabrevois. Katrina says they are considering replacing some Sabrevois vines with white grape varieties Frontenac Blanc and La Crescent, the latter of Katrina and Adam’s favorite hybrids.

When the decision was made to buy a Wisconsin winery, Katrina said they expected to rely heavily on West Coast fruit, which they do because of the volume available. “But when we started making wine from hybrids, they are so expressive and demand your attention.”

Customer favorites like Marquette are semi-sweet, but Katrina places a heavy emphasis on “semi,” noting that they are off-dry and food-friendly. “We are also very proud of the Frontenac we grow here on the property. It’s a versatile variety and we have fun playing with different styles.

Addition of a brewery

Gnarly Cedar Brewing, named after Wisconsin’s oldest tree, located near Magnuson’s property, was a natural progression. “People come for the wine, but there’s always a friend or husband who’s more after the beer,” Katrina says. Growing up, Adam and his father brewed beer together.

Brewing operations have recently been upgraded to a seven-barrel system to provide a balance between easy-drinking beers like pilsner and amber, or fun beers brewed with grapes. There’s a milk stout and milkshake IPAs like the refreshing and tangy Lemon in My Pocket. Adam is the head brewer and has developed styles such as the Farmers’ Marq Saison, made with Marquette grapes, and an IPA made with Frontenac Blanc.

Katrina promotes a “trust me” attitude in the tasting room, encouraging customers to push their limits. They have also added a kitchen and menu to provide a country place to dine. Every Saturday in October features outdoor music. After the Thanksgiving holiday, look for the Music in the Cellar series, as well as winter activities, dinners, and wine and beer tastings.

Most LedgeStone wines are available in the tasting room, as well as select shops in Green Bay and Appleton. Wines can also be shipped throughout Wisconsin.

Apples and Orange County: a perfect match for pick-your-own orchards