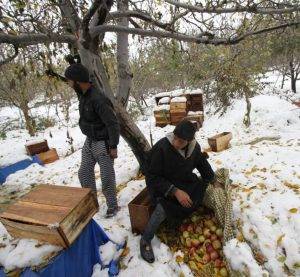 As Aamir Hussein walking towards his orchard on a snowy morning in southern Kashmir, red, green and yellow apples, some ripe and some unripe, lay on acres of land.

After a few minutes of standing there and looking around, he sat down, shaking his head in amazement. He was unable to understand what had happened and how the heavy and unusual snow had damaged the trees and crops in his orchard.

He found that 10 of the 70 trees, some as old as 30 years old, had split under the weight of the snow, and another 15 branches had fallen or were hanging down by the thick skin of the trunk and branches. .

The first snows in the Valley are never pleasant and the farmers are constantly caught off guard, even if the meteorologists warn them in advance.

Farmers are terrified of unexpected snowfalls, especially during apple picking season. The snow still beats Kashmir apple growers before december, regardless of the location of the fields or the variety they harvest.

Hussain had turned pale as he assessed his losses on his two-channel farm. He claims that 40 percent of his apple harvest has been wasted, despite picking apples from morning to midnight in the past four days, thanks to weather forecasts issued by the Srinagar Metrological Office.

“The advice from the Met came a bit late,” he continued, “otherwise I could have saved more product.”

Fruit growers say the damage is particularly severe in the steep Shopian area, where snowfall has been heavy and damage substantial. Regardless, the tastiest and most delicious apples in Kashmir are grown at Shopian.

Bashir Basheer, President of the Kashmir Valley Fruit Growers and Dealers Union, called on the government to provide rapid financial assistance to producers who have suffered losses. “Apple growers should be made aware of measures that will protect their crops from further damage.” Apart from that, some relief should be provided, “he added.

Ajaz Ahmad Bhat, Director of Horticulture, said he had visited many orchards in southern Kashmir and was aware of the losses. He said his ministry advised growers to speed up harvesting of apples after the weather forecast called for snowfall and heavy rains, but farmers did not harvest the entire crop because the apples failed. took the color. “Today I examined the damage by making site visits.” From my early reports, snowfall caused 10% of the damage, ”he said.

How the vineyards found this YF&R