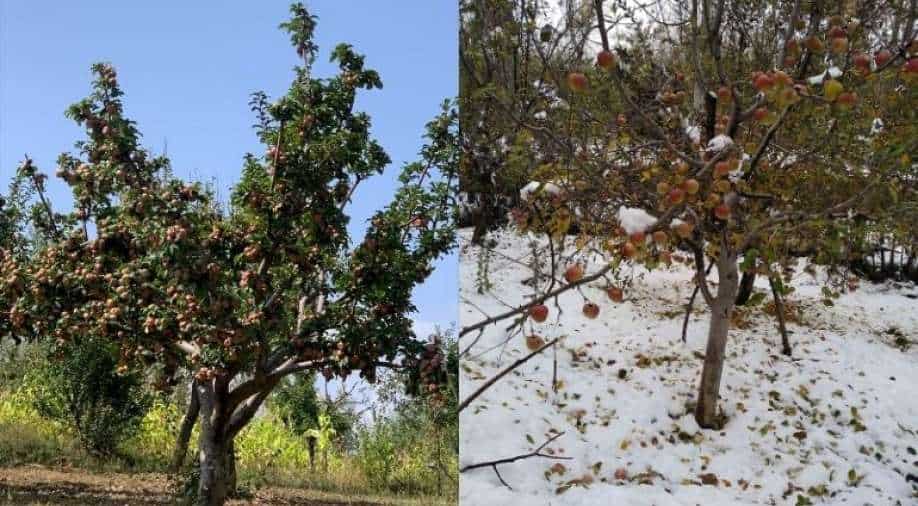 Kashmir: Apple orchards may not cope with climate change, with farmers losing up to 40% of their harvest each year, India News News

The famous apple orchards of the Kashmir Valley may soon disappear due to erratic climate changes in the region. Over the past decade, the valley has experienced major climate changes, such as early snowfall, due to which farmers have lost around 40 percent of the harvest each year.

In 2021, the first snowfall of the season in the Kashmir Valley occurred in October. At that time, the majority of farmers had not harvested the produce. Researchers say the damage to apple orchards and produce ranged from 4 to 40 percent.

New research by Dr Irfan Rashid suggests that the apple orchards in the valley may not survive if these climatic conditions prevail.

â€œWe have a significant number of farmers throughout the Kashmir Valley who practice apple cultivation. What has happened over the past two or three decades is that we are experiencing changes in many meteorological parameters. We have some very useful evidence with us, which is the temperature and precipitation models. If you look at the precipitation patterns, we were getting substantial precipitation in the winter, there were also sporadic events in the spring, but the fall was dry, but what we are seeing now is irregular snowfall in the fall ” said Dr Irfan Rashid, Coordinator, Department of Geoinformatics, Kashmir University.

â€œIf we look at Met History, we had some really heavy snowfall in the first week of November in 2018 and in 2019. We got snowfall in October, which is very early. There are many varieties of apples which are harvested in November, so obviously when we have irregular snowfall the harvest will suffer and damage the trees as well. In 2018, we conducted a survey which suggested that 4 to 50 percent of the damage, some orchards were damaged up to 50 percent. On average, around 35% of our crop was damaged, ” he added.

He also said that if we do not make the required changes, the horticulture industry, which is the backbone of Kashmir’s GDP, will be severely affected.

“ If we do not take into consideration the erratic snowfall that Kashmir is experiencing, this promulgation of horticulture as the economic savior of Jammu and Kashmir will not be sustainable in the long run, ” added Dr Irfan Rashid, Coordinator, Department of Geoinformatics, University of Kashmir.

Researchers believe the past two decades have seen major climate change in the Kashmir Valley, but over the past five years, apple orchard farmers have been hit the hardest. This year was the third consecutive crop destroyed by early snowfall.

2019 saw the maximum damage as Kashmir witnessed the heaviest snowfall this year, damaging crops and trees worth millions.

â€œIn my research too, we basically vouched for high density apple orchards, but we have to take into consideration the harvest season and the timing shouldn’t be October and November, it has to be early. if we get snowfall in october like this year, it may be that in the years to come it may be that the snow will return in october, so if we have varieties of apples where apples are harvested in the month of October, it won’t be sustainable, but if we have varieties that can be harvested in mid-September or late September, which could be a good way to support and channel horticulture, ” said the Dr Irfan Rashid, Coordinator of the Department of Geoinformatics at the University of Kashmir.

Farmers, on the other hand, say it would be extremely difficult to switch to high density orchards. Existing traditional apple orchards would have to be completely removed to plant new trees, resulting in huge losses for farmers.

Winter is approaching, so is the rain: Controlling erosion in the vineyard during the off-season | Local News