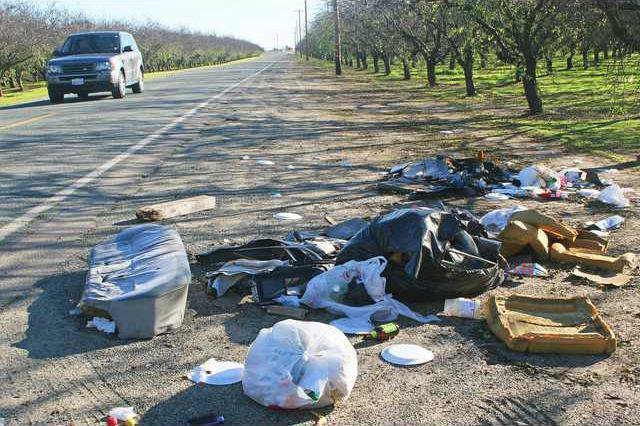 It is not acceptable to enter, throw away or steal crops from farmer-owned properties

The almond farmer – like other farmers – deals with those who are self-centered among us and do not respect the property of others.

As one local grower pointed out, after the buzz of bees in orchards over the past week, there are those who think it’s okay to roam on someone else’s land, even if only to snap a few photos using the glorious blooming almond trees as a backdrop.

In today’s litigious society, there are all kinds of concerns on the part of a homeowner. What to do, for example, if someone trips on an irrigation pipe.

This particular grower who describes himself as a small farmer noted that my suggestion that people get out and walk or run along the orchard ring road – read that orchard edge along the roads – is likely to be lost in translation . Peripheral clearly does not mean crossing or entering the orchard.

They suggested before the next bloom happened that I might want to report it as the damage is done for this year.

They added that the towns of Ripon, Manteca and Lathrop might be able to work with a grower and allow the public — for a fee — to wander through an orchard while inhaling the scent and taking photos at their leisure. Call it ag-tourism.

I do not agree. Not with the concept, but that the “evil” is done for the year.

It’s because it never stops.

And by that I mean total disregard for property rights and outright theft.

The days will soon arrive when the apple orchards east of Ripon along the River Road will be ready for harvest.

I can never pass them without remembering a day I spent biking from Manteca to Knights Ferry and back in 1992 with a friend’s niece who came from Miami where she was deputy for Dade County.

As we passed Sexton Road, she wanted to take a break. She got off her bike and rode into the orchard, stopped at a tree, raised her hand and picked an apple.

I asked what she was doing.

She looked at me like I was an idiot before replying, “I’m picking an apple.”

Without wasting time, I said that she was basically stealing.

I went on to explain what I thought was obvious. The trees just didn’t show up there since Fuji apples aren’t native to California.

Someone bought the land, pays taxes on the land, works the land, buys trees, buys fertilizer and buys water. They invested time and money. They also run the risk of bad years wiping out good years. In some cases, the harvest is a family’s only income for a year. And they have to wait two to four years before they start generating income until the trees get to the point where they can produce a crop.

I asked how she would feel if she had roses in her front yard, she bought, planted, pruned Japanese beetles, sprayed for aphids, watered and fertilized only for someone to come into their yard and cut their roses for their own pleasure once they have started to bloom.

She said she never thought of it that way before taking her first bite.

One day he met a lady who had stopped and was in the orchard picking almonds that had been shaken to the ground.

Steve said he approached her and asked what she was doing as she placed almonds in a box.

Wasting no time, she said the farmer had given her permission to collect the almonds so they wouldn’t go to waste.

Anyone who has lived in almond growing areas knows full well that almonds are thrown to the ground and orchards are swept twice to harvest them. It was not a problem of “excess” almonds falling from the tree and getting lost on the ground.

Steve then reported that he told the woman, that was interesting considering he was the farmer who owned the orchard and he never remembered giving her permission to steal his almonds.

The woman – angry – knocked the box over, said a few choice words and rushed to her car.

My favorite transgression that people commit against farmers – and the most common – is to use their orchards and fields as impromptu dumping grounds for trash as well as pets they’ve had enough of.

It takes a lot of pure gall to load trash, head out into the country and look for a place to dump old chairs, broken washing machines and TVs, renovation debris, trash bags, or even abandon boats valueless.

It would be poetic justice if a farmer would one day load up the debris from his orchard, drive to town, and dump his trash on the lawn of those who think his property is a free dump.

For the record, San Joaquin County spends more than $1 million a year collecting these roadside dumps because most of it ends up in the county right-of-way. What is dumped on farmers’ property is their responsibility. Quite frankly, I don’t blame the farmer if he pulls such “gifts” left on his roadside land for the county to reclaim.

Since it doesn’t cost that much to bring trash to the Lovelace transfer station as well as each of the towns in the area – Manteca, Ripon and Escalon offer free once-a-year pickup of large items and there are companies on almost a monthly basis that will come out and take away old devices and such people who trash the countryside or lazier than they are cheap.

Perhaps the most inhumane thing to do is that if you get tired of – or can’t take care of – dogs or cats, you have to drive out into the countryside, drop off your pet, and drive away.

Rest assured that the farmers are not carrying out rescue operations.

Domesticated dogs and cats have an almost impossible challenge to survive in the middle of nowhere.

And as a bonus, in addition to dogs or cats being starved, killed by coyotes or run over by a vehicle, sometimes farmers have no choice but to kill pets that people believe to be kind in no way. not abandoning them to an animal shelter.

The best example was in the country southwest of Lincoln where I grew up in Placer County. There were several turkey ranchers who often had no choice but to kill the “stray” people dropped off near their ranching operations after these dogs and cats attempted to seek refuge with them.

This is because pets often carry viruses that have the ability to wipe out an entire herd.

This is why the underside of vehicles entering the shelters is regularly disinfected.

Turkey farmers can ill afford to lose their investment and the income they use to feed their families because someone is fed up with their pet and instead of doing the right thing and take him to a shelter, he just dumped him in the countryside.

And those who take a litter of newborn cats or puppies, put them in a bag, tie it up, then throw them out the window in the countryside as they pass must know that there is a special place in hell that awaits them.

This column is the opinion of the editor, Dennis Wyatt, and does not necessarily represent the opinions of the Bulletin or 209 Multimedia. He can be reached at [email protected]

Pollination by bees contributes to 70% of the world’s crops