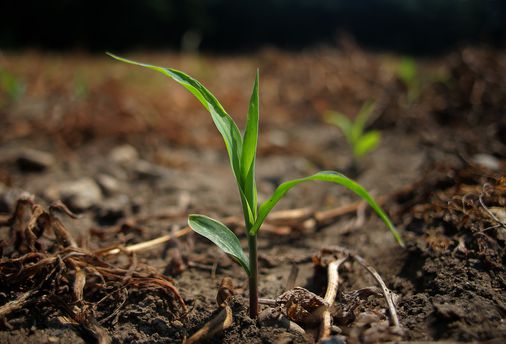 “I play with my crops all the time”: Farmers struggle to adapt to drought

Corn, potatoes and other “water pots”, as Dumaresq calls them, are suffering from the prolonged drought. Due to their shallow roots, vegetable crops struggle to stay hydrated during drought conditions and continuous heat waves. But in orchards, where the roots of fruit trees reach deeper groundwater, farmers say the dry summer hasn’t been so bad.

At Farmer Dave, most of the water is pulled from the ground by diesel pumps, Dumaresq said. But after weeks of drought, he estimates the water table – the depth at which the ground is saturated – has dropped 7 to 8 feet, leaving only about 3 feet of water accessible to pumps.

Ripening corn needs about an inch of water each week, Dumaresq said. On just 1 acre of land, that’s over 24,000 gallons.

Of Dumaresq’s 100 acres of farmland, 20 acres lack irrigation and generally rely on natural water sources – rain – leaving “no options” in a severe drought like this, he said. . The rest is a careful balance between the needs of different crops and what they can bring to market.

“If you have a field that you know won’t be ready for a month and the water source dries up,” he said, “Yes, you might as well give up that corn.”

At Medway Community Farm, manager Todd Sandstrum said the crops were “surviving,” but not thriving.

Medway has three properties along the city’s Chicken Brook, which generally provides a steady stream of irrigation water. At their Adams Street satellite, Sandstrum said, the creek has sunk so deep that water is inaccessible. By early August, he said, things only got worse.

“We have applied for an emergency agricultural use permit with the town of Medway to hook up to municipal water,” he said. “In a crisis, you have to start being creative.”

Sandstrum said the farm now uses municipal water three days a week, but that source could be cut if the drought worsens and the city reassesses its water needs.

Sandstrum joined the Community Farm in January, so when Adams Street dried up, he approached the farm’s board to ask if there had ever been a need for a “plan B”. There never was.

“It was the opposite,” Sandstrum said. “This site tends to be always wet.”

Some crops — tomatoes, peppers and a few tropical plants — did well in the heat, but Sandstrum said dry soil could be a problem for fall crops, which are just starting to sprout. He said he feared the first heavy rains would pour into the river instead of seeping into the “hardened” land.

“Unless we have long, slow, steady rain for a day,” Sandstrum said, “my fear is that it will just fall on land and run off.”

The CN Smith Farm in East Bridgewater withstood the heat waves and drought conditions without suffering too many losses. However, Christian Smith, co-owner of the farm, said it was not without difficulty.

“Any kind of heat for an extended period of time is stressful for crops and it’s very difficult to keep them irrigated without rain,” Smith said. “We have to go out and put some water [the crops] ourselves.”

Smith said the farm uses a pair of weather stations, which measure rainfall, temperature and soil moisture on its land to monitor conditions and protect the most vulnerable crops like corn, pumpkins and onions.

Smith said the farm also has a natural river that allows the property to access water during times of drought. For produce that grows on trees like apples, Smith is equipped to keep the sun at bay.

“You can spray sunscreen on an apple that’s not like the sunscreen we use,” Smith said. “It’s a reflective white calcium that reflects light and helps reduce the incidence of sunburn on apples.”

Glenn Cook, owner of Cider Hill Farm in Amesbury, is adapting to long heat waves by getting creative: making cider with fruit that would otherwise spoil in the sun.

When scorching temperatures prevented customers from visiting the farm to pick their own raspberries during the July heatwave, Cook said Cider Hill employees picked the fruit themselves before scorching sun bleached it .

“All crops left on bushes and trees for [customers] must now be chosen by us,” Cook said. “Then we can turn them into fruit varieties of our hard cider with them.”

Cider Hill Farm also has efficient irrigation systems to mitigate the adverse effects of drought. Through a combination of deep wells, thousands of feet of underground pipes, and a variety of above-ground irrigation methods, Cider Hill avoided crop loss despite moderate and critical drought conditions throughout Massachusetts.

“To irrigate an orchard, you only water the roots and not between the trees. The grass between the trees is brown, but the trees still look good,” Cook said. “We are very lucky that we have not lost any crops due to the drought.”

Like other orchards, Mother Nature has been kind to Honey Pot Hill Orchards in Stow. Thanks to natural water sources on the farm property, the drought was bearable.

“There are three ponds on the property which are quite large. We’ve just been very lucky that we haven’t dried them out for the past two years,” said Chelcie Martin, the orchard’s general manager.

The Stow agritourism spot invites guests to pick fruits such as apples, peaches and berries. Martin explained that fruit trees are less susceptible to drought than vegetable crops.

In fact, due to their ponds and an additional marsh, the cultures of Honey Pot Hill have even seen benefits.

“I think our peaches taste like sunshine like never before, which is just amazing,” Martin said. “I didn’t think there would be a positive outcome to this, but [these are] the best peaches I have ever eaten in my life.

At farmer Dave’s orchard, the peaches also “look great,” although they’re a bit smaller than usual, Dumaresq said. Still, this year’s drought may mean fewer flowers – and with that, less fruit next year.

“I never go to the casino,” Dumaresq said. “Because I play with my crops all the time.”

ALMOND ORCHARDS CAN BE KEY TO WATER STORAGE

The unique wines and vineyards of the Canary Islands