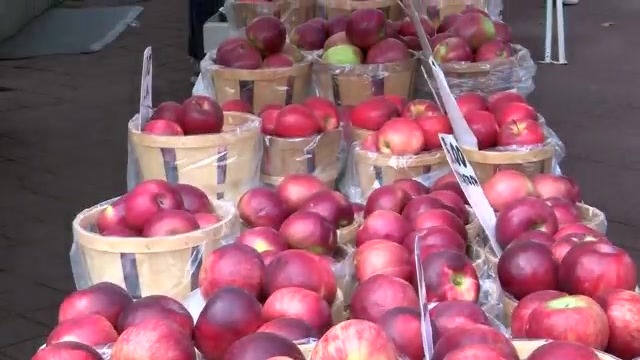 WILKES-BARRE, ALZERNE COUNTY (WBRE / WYOU) – Local farmers have had a tough climb this year with heavy rains, hurricanes and now unusually warm weather for the season. So how did this affect their harvest?

Farmers are in the middle of their fall harvest and many have seen good harvests despite some weather obstacles.

“This year we had a very good year. We were scared after Ida where we had six inches of rain in one day. It was scary and we thought our tomatoes and all that would hurt. In fact, everything went well, ”said Logan Broyan, Broyan Farms.

With the heavy summer rains behind us, many farmers say the sun and warm weather have helped.

Dymond Farms owner Chris Dymond says that while there was an excessive amount of rain, his farm still had a great year.

“We had more rain than we wanted but we were lucky,” said Dymond. “We’re on top of a hill, so we have a lot of wind, so it dries a lot. Our harvest has been really fantastic this year.

“Hot weather is good for things like tomatoes and peppers. This will make them grow and come, ”explained Broyan. “The only thing that will affect them is when we get a gel, which we can have in a week or two. This is what will kill our tomatoes, peppers, zucchini and beets.

For Brace’s Orchard, the warm weather has been almost perfect for their apples.

“The warm weather was nice. We had cool nights. Hot days and cool nights transform the color of apples. This is how you get a nice red color on the apples, ”explained Logan Brace. “If you go to southern Pennsylvania or the upper parts of Maryland, some apple varieties won’t have a good color because they won’t have the chilly nights we have.”

We’ve had those 70, 80 degree days, but sometimes those nights are dropping into the 50s, ”Brace said.

Despite a few potential obstacles, local farmers still welcome help from the public.

“We appreciate everyone who shows up to support the farmers market and in the local orchards and farms. It’s been a great year and let’s keep it that way and support local agriculture, ”said Brace.

Farmers also said they would take the warmer weather out of the cold and snow, any day of the week.