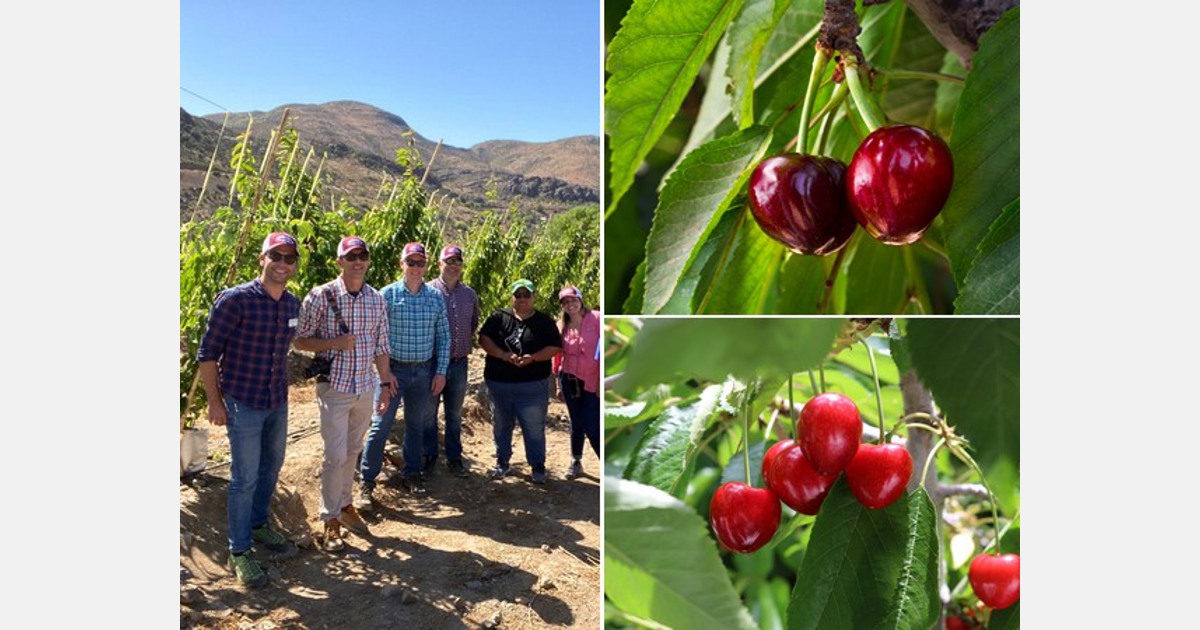 Chile has become a key region for growing cherries and recently the fruit breeding company IFG welcomed its growers to the orchards of northern Chile, in the region of Ovalle, IV to show off their Cheery Cherry™ varieties. In addition to the northern part of the country, this variety is also grown in central Chile, San Vicente TT, region VI.

In 2016, the first Cheery Cherry™ variety to be planted commercially was Cheery Moon™, and the acreage of all Cheery Cherry™ varieties has expanded to 110 acres (44.34 ha) today. “Our varieties are unique due to their early harvest window and low chilling hour requirements,” says Alwyn van Jaarsveld, International Cherry Business Manager at IFG. The advantage of low cooling is multiple as it allows cherries to be grown in regions which until now have been less suitable, or even unsuitable, for their cultivation. Over the past few years, strange weather patterns around the world have caused many fruit growing regions to experience warmer than normal temperatures. “Low-chill cherries are much better suited to such conditions and help kick off the cherry season with incredible flavor and a great dining experience. It has always been attractive, bringing value to customers and producers. »

All of IFG’s cherry varieties, regardless of refrigeration requirements, are early harvest. Some of the company’s varieties overlap in the harvest window. “At first glance, this might seem to reduce the need for a new selection in the same window,” said Antonia Sanchez-Labbe, Technical Manager of IFG International Cherry. However, the varieties will have different chilling requirements, making them equally important to IFG for use in other chilling regions.

Cheery Moon™ on the left and Cher-ten variety on the right.

Cher-ten, the new variety
Cheery Moon™ is not the only cherry variety grown by IFG in Chile. The company has ten varieties of cherries patented in the country. The very first cherry harvest to take place in Chile this season was the IFG Cheery Crunch™ variety. “We are very proud that our variety was the first harvested in the country,” said van Jaarsveld. The latest version of the Cheery Cherry™ program is IFG Cher-ten (the brand name will be announced next year). Until 2021, it had proven to be an amazing cherry in low to medium conditions (>300 chill hours), such as Delano, CA. “However, it wasn’t until this recent Chilean cherry season that we were able to truly understand the exceptional performance and adaptability to low-cooling environments,” Sanchez-Labbe said. The variety has the potential to yield a good crop in winters where cold accumulation is less than 300 chill hours. IFG Cher-ten is a large heart-shaped fruit with very long stems that can stay fresh even after 40 days of storage.

“It has good firmness and a good flavor profile with brix levels generally above 18◦. In addition, the variety has a low sensitivity to rain, which decreases the risk of cracking. The harvest window is four days before Brooks. However, it can be pushed earlier under specific conditions.

These characteristics have sparked the interest of growers and importers around the world to plant this variety.