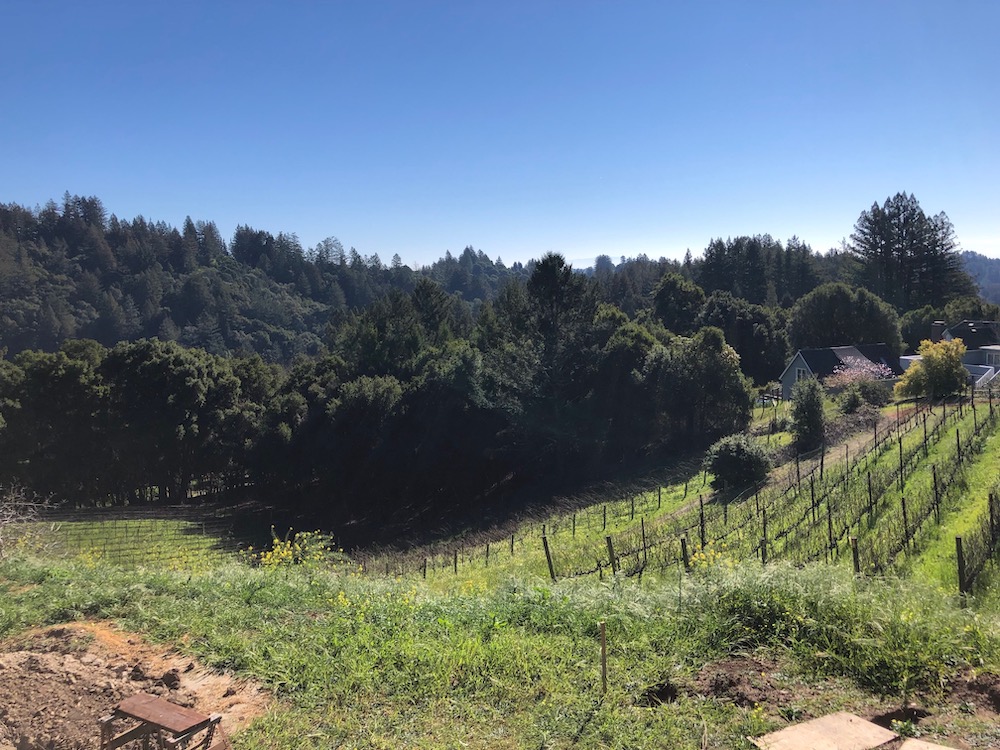 February 22, 2022 – Climbing Trout Gulch Road to the Larsen intersection feels like swimming out of the murky depths to where the light plays brightly and blissfully on the water above. Suddenly you can breathe again. As you turn down the driveway, you see the old apple trees, still adorned with golden apples, the birds feasting on them like a fragrant banquet. Rows of neat vines run up and down the sloping hillsides, the trellises open to soak up the sun. A Great Pyrenees lounges lazily at the edge of sun and shade at the top of the driveway, near a stand of redwoods, one eye on the lookout.

Smiling from ear to ear, the jovial and welcoming Eugene “Eug” Theron and his wife Julie waved me over to move Lobo, a rather large dog, who won’t budge. I can’t blame her one bit. It’s a pandemic rescue and she’s way bigger than me, so I’m giving her some space. Like everyone who lives on this property, including their adorable little puppy “Worsie”, Lobo is a refugee.

The Therons arrived in America in 1989 with barely enough money to rent a car, let alone buy property. But they were determined to fulfill their dream of earning a living by making wine. The dream is in the genes and dates back to the revocation of the Edict of Nantes, when Louis XIV essentially took away Protestants’ freedom to pursue their religious preferences. It is important to remember his past because he always, always has his hand on the wheel of the future.

Eug tells me that in 1688, Theron’s French Huguenot farming ancestors fled persecution to the Languedoc region of France, now famous for its inexpensive, full-bodied reds, in South Africa. Their agricultural way of life flourished there and one of its distant relatives, Professor CJ Theron, was among those who propagated pinotage – a cross between pinot noir and cinsault – today the dominant grape variety in South Africa. But as the ugly anachronism of apartheid became a flashpoint in the 1980s, Eug and Julie found themselves yearning for a new opportunity.

As beautiful as agriculture is in South Africa, the political climate has made the United States much more attractive. Working on their respective careers in their new home, Eug yearned to return to his farming roots.

“Every weekend we weren’t traveling, we were visiting five or six properties that I found online,” says Theron. “Julie was good at assessing neighborhoods before she even arrived on a property. ‘Crack house over there!! Nope! I don’t like the atmosphere. So when we drove up to this place, she didn’t say anything. I felt pretty confident that maybe we were onto something. We got to the door and I looked over and said in Afrikaans, ‘Die plek is sjarmant!’ which translates to “This place is lovely!” “The name stuck, and to honor their French heritage, they chose the French spelling ‘Charming.’

That was in 2014. When they realized the place had been pre-planted with pinot noir selected by Jim Schultze and previous owners, Dick and Diane Klein, Eug and Julie, who had already fallen in love with the house built of old redwoods in 1979, knew they had to have it.

The 16-acre property, of which 13 acres are under vines, consists of two distinct, deep bowls – one sloping down a steep hill on the border with Richard Alfaro’s Trout Gulch vineyard – and the other sloping gently in front the house to the southwest. This vineyard is planted with three Pinot Noir clones, 115, 667 and Chambertin, in six plots.

It would take some time to transition farming and winemaking from Schultze to Theron, but the transfer officially took place in 2017. Meanwhile, there was work to be done in the vineyard and in the cellar.

“I enrolled in the UC Davis winemaking program and learned winemaking from the ground up, with great help from winemaker Prudy Foxx and winemaking consultant Tom Stutz,” says Theron. “While I’m proud of our debut vintage, I really like where things are going, especially as we learn about the vine parcels and which barrels are the best match for each.”

At the beginning, he had a lot of new barrels, the bane of any small new cellar, but he tries to bring harmony. Did we mention he takes care of all the crazy property himself? Yes, he has a day job, working for the Securities and Exchange Commission as an auditor, while Julie runs a real estate investment firm in Berkeley.

“There are no trust funds or inheritances here,” says Theron. “Before, my job involved constant travel. The pandemic has helped me spend more time in the vineyard and working on the tasting area. He is currently building a terrace from the existing barrel room and the intimate wine tasting room, which will offer a magnificent view of the vineyard and the house. There will also be an area accessible to people with reduced mobility. For those with strong legs there is a staircase leading to a gazebo with a fabulous view of Monterey Bay.

This place radiates growth, life, warmth and hospitality. It feels like both a celebration and a desperate attempt to impose some sense of order on a truly sprawling sense of possibility. A plant cover flourishes between the vines that have not yet been pruned. “I will mow the cover crop when it reaches hip height, then I will prune. I’m still concerned about freezing,” Theron tells me. Given the turn of the weather this week, this approach seems prescient.

A rushing fountain attracts many birds, while protea, a flowering plant native to South Africa, arouses the curiosity of hummingbirds. Everywhere you look there is something to pierce. The place is dry organic farmed and all pruned canes are crushed and mulched in the vineyard, to promote healthy soil. Organic fungicides help mitigate disease, and winter cover crops replenish nitrogen levels and support beneficial insect life.

The tasting felt like an interruption, but that’s my job, so I walked around the bar, where I spotted a tarnished silver vessel that I thought was some sort of ritual goblet. As I know little about South African customs. No no, Theron said. “It’s one of our family heirlooms! Oh, one of many! It’s actually an ashtray. Look, this little receptacle next to it is for matches!

He pours me a sip of the 2020 Rosé de Pinot Noir ($28), his first iteration. It is a direct press, chosen very early. In fact, it was plucked from the vine a whole month earlier than red grapes. Theron proudly points out that it’s the antithesis of bleeding, which explains its pale pink prettiness, so pale it’s easily mistaken for Hampton water, Bon Jovi’s much more expensive Provence rosé.

It’s pretty and quite cheerful and won’t make you waver at 11.2%. We were just getting started.

Next up is the 2019 Tondré Chardonnay ($38), a superb lemon drop of a wine, made in a third of new French, on lees for 18 months, stirring once a month. “Other than that, I don’t pull corks, so there’s no barrel tasting,” Theron explains. It defers SO2 until bottling. The wine is super juicy with ripe nectarines, cookies and honey, with apple jam and quince for a creamy guava-scented finish. If he had picked the riper fruits, everything would be tropical. Theron says he originally planned to bottle this chardonnay after 10 months in oak barrels, but life got in the way. “When I tasted it afterwards it was so much better, I thought I might as well let it sit a bit longer in the barrel.” Tom Stutz introduced Eug to Joe Alarid of Tondre Grapefield. Thank goodness, because the Chardonnay is amazing.

Everyone will identify with the concept behind the 2018 Lé Refugié Pinot Noir ($38), with its bouquet of plums, raspberries and iron filings indicating quite a tantalizing treat on the palate. At just 12.05% alcohol and made in a Damy cask, its grippy, woody tannins and mouthfeel make this a popular pinot noir for family gatherings.

Theron says he did it “in honor of all migrants and refugees, and to celebrate the journey we’ve all had to endure to be where we are today!”

The 2018 Estate Pinot Noir ($48) is made from every block of the estate and delivers wonderful depth from the first puff to the last sip. The aromas reflect the terroir so precisely, with undergrowth, spring meadow, pine, orange zest and porcini mushrooms. There is a puff of ink as well. Complex and delightful in texture and acidity, it delivers flavors of raspberry, pomegranate, cherry, leather and Linzer pie. Its superbly spicy finish is reminiscent of pfeffernusse, the German Christmas cookie. Get your hands on this wine that spent two years in barrel, then spent a year in bottle before going on sale.

The Pinot Noir Réserve spends three years in barrels. Theron plans to make a pinot noir from each block of vines, for a total of six different wines. “It will add so much to the spice rack,” he says, his eyes dancing with the possibilities. He is also considering grafting Pinot Noir onto Chardonnay, so he can add an Estate Chard to the lineup.

The to-do list grows longer every day, but the joys and rewards of being a winemaker will surely allow Eug and Julie to make those long-held dreams come true.

Charmant will serve its four wines at Cantine Winepub in Aptos on Saturday, February 26 from 1 to 4 p.m., as part of the Aptos Wine Wander. For more information: charmingvineyards.com

Laura Ness is a longtime wine journalist, columnist and judge who is a regular contributor to Edible Monterey Bay, Spirited, WineOh.Tv, Los Gatos Magazine and Wine Industry Network, as well as various consumer publications. His passion is to tell stories about the intriguing characters that inhabit the fascinating world of wine and food.