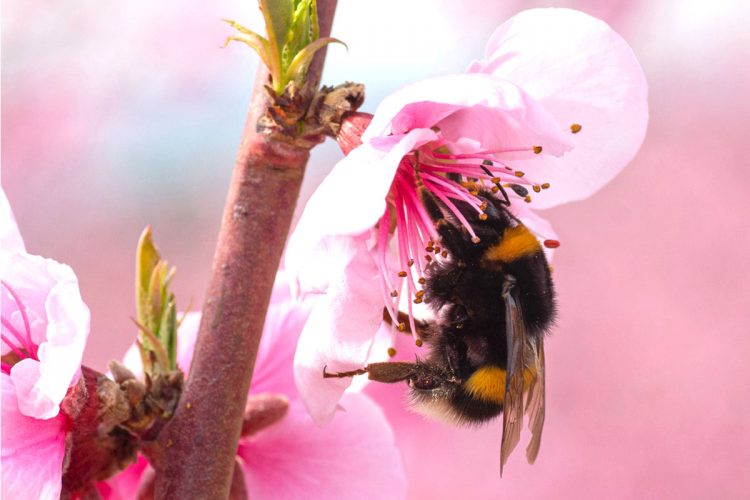 Scientists from the University of Washington and Emory University report that an antibiotic sprayed on orchards to fight bacterial diseases slows bumblebee cognition and reduces their foraging efficiency. The study, published Feb. 9 in Proceedings of the Royal Society B, focused on streptomycin, an antibiotic that has been increasingly used in US agriculture over the past decade.

“No one has examined the potential impacts on pollinators of widespread spraying of antibiotics in agriculture, despite their widespread use,” said lead author Laura Avila, a postdoctoral researcher at Emory University.

The team tested how the common oriental bumblebee, Bombus impatiens, responds when its food is dosed with streptomycin. They fed an experimental group of bees a diet of sugar water dosed with streptomycin, while a control group received sugar water. Research has not established the level of streptomycin that wild bumblebees receive when foraging on crops sprayed with the antibiotic. But the dose the team tested – 200 parts per million – is likely the highest bees receive through their floral nectar diet, based on estimates of the concentration of streptomycin sprayed on crops and the frequency of spraying.

“This paper is a first step in understanding whether the use of antibiotics on food crops can harm pollinators that benefit agriculture,” said lead author Berry Brosi, who started this study when he was a faculty member at Emory University and has been an associate professor of biology at UW since 2020.

After two days of this diet, the team presented the bees with two strips of construction paper – one yellow and one blue. One color was saturated with pure water and the other was saturated with sugar water. The team measured the number of trials it took for an individual bee to show its preference for the colored band saturated with sugar water. The streptomycin-fed bees required about three times as many trials to establish the association compared to the control group. Streptomycin-fed bees were also more likely to display avoidance behavior towards either strip of paper.

In another experiment, bees that passed a training threshold underwent a short-term memory test five minutes later: they presented each bee with both strips of paper simultaneously and allowed her to select one. . Control bees chose the sugar-saturated band 87% of the time. For bees fed streptomycin, the success rate dropped to 55%.

A third experiment tested foraging abilities in a chamber with two types of artificial flowers – blue and yellow – that randomly dispensed sugar water or plain water. Each bee was equipped with a tiny, ultra-light radio frequency identification “backpack” to monitor its movements among the artificial flowers. The team found that bees exposed to antibiotics visited fewer flowers that dispensed sugar water compared to control bees.

Based on evidence from other studies, the researchers hypothesized that the negative impact of streptomycin on bumblebees may be due to disruption of insect microbiomes.

“We know that antibiotics can deplete beneficial microbes, as well as pathogens,” Avila said. “That’s true whether the consumers of antibiotics are people, other animals, or insects.”

But over the past decade, the spraying of American crops with antibiotics has increased exponentially as farmers battle a rise in bacterial plant infections. These include ‘fire blight’, which can blacken apple and pear blossoms and kill them, as well as ‘citrus greening’, which turns citrus fruits green and bitter and has devastated millions of acres of crops. in the United States and abroad. .

“The production of our food, the livelihoods of farmers and the health of pollinators are all linked,” Brosi said. “It is critically important to find ways to maintain agricultural production while maintaining the ecosystem services – including pollination – that a biodiverse ecosystem provides.”

The team will then conduct field studies on experimental orchards treated with streptomycin. If they find a detrimental impact on the bumblebees, the researchers hope to provide evidence to support recommendations for methods and policies that may better serve farmers.

The paper’s co-authors are Emory alum Elizabeth Dunne and David Hofmann, a former postdoctoral fellow at Emory. The research was funded by the National Institutes of Health, the National Science Foundation, the Eva Crane Trust and Emory University.

Recent frosts could have a big impact on almond crops