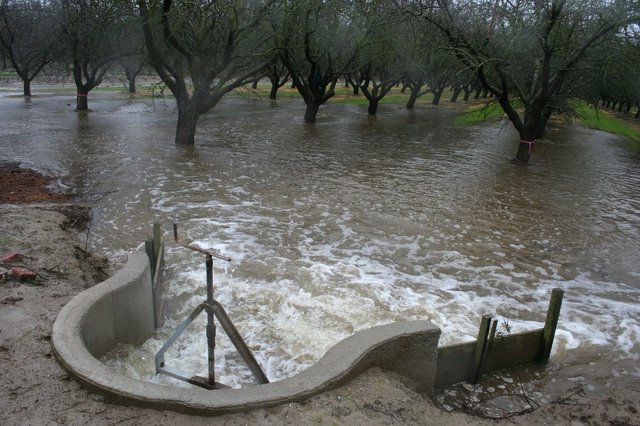 ALMOND ORCHARDS CAN BE KEY TO WATER STORAGE

The next “big thing” in California water development may not be 300-foot-tall dams.

Instead, it may intentionally divert runoff from winter storms to flood almond orchards northeast of Ripon and vineyards near Manteca and similar permanent cropland throughout the San Joaquin Valley.

Proactive groundwater recharge using California’s huge acreage of permanent crops, such as almond orchards and vineyards, could become a central and essential part of a plan to meet the demands of water as well as addressing hydrological patterns that are expected to be altered by climate change.

The study will focus on hydrology and explore various soil types. The objective is to determine the degree of soil permeability throughout the basin and the potential for diversion of runoff.

Irrigated perimeters are the perfect subject of study. This is because they already have transportation systems in place that tap into the Stanislaus River which drains the 1,195 square mile basin.

And they also put in place distribution systems that could move excess rainfall runoff diverted from the Stanislaus River. This means that instead of heading to the Pacific Ocean, excess runoff could be directed to the most suitable orchards and vineyards to recharge groundwater.

Unlike building off-stream reservoirs such as the San Luis Reservoir to divert excess storm runoff for later use, ground recharge reduces water loss through evaporation. It also “stores” water where it is needed.

Not only would it be a tool to ensure groundwater stability, but it could eventually begin to restore groundwater to previous levels that could be drawn off during times of drought.

The study is not in a vacuum.

The University of California is conducting multi-year studies of the impact of long-term flooding of orchards when trees and vineyards are dormant.

There are a lot of “ifs” and “variables” that need to be considered.

First and foremost is the amount of long-term damage – if any – that such a practice can have on tree roots and vines.

Preliminary research is promising. The vines seem to be more resistant while

California is grappling with more than drought, overdevelopment in water-deprived basins, and the unequal distribution of available water supplies.

The state’s dams and waterworks systems rely primarily on capturing runoff from the Sierra and Cascades snowpack to meet approximately percent of California’s water needs.

As such, current dams could end up being in the wrong place to capture the bulk of winter precipitation in the future.

SSJID chief executive Peter Reitkerk said initial meetings regarding how the data will be collected have been held with the Department of Water Resources.

Reitkerk said such a study is consistent with the district’s commitment since its inception in 1909 to be stewards of the Stanislaus River basin and to maximize water use, whether for irrigation or urban use or to generate electricity.

The general manager emphasized that the district is not committing one way or the other.

If the study shows that there is an effective way to recharge orchards in this way and that corresponding research from UC Davis can address grower concerns about how roots when dormant will behave with such recharge, winter recharge could be a future option for the district. to chase.

The district provides irrigation water to 50,000 acres, down about 2,000 acres over the past 20 years or so due to urbanization primarily in the Manteca area.

Of this area, 66% of the land is planted with almond trees. There is also a fair amount of vineyards.

“I play with my crops all the time”: Farmers struggle to adapt to drought